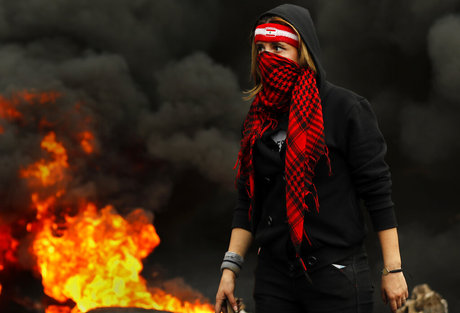 The country is in the grips of its worst economic crisis in decades, compounded by the coronavirus pandemic.

Prices have soared and more than half of the population are living below the poverty line, but the divided political class has for more than six months been unable to form a cabinet.

Black smoke billowed up from overturned rubbish dumpsters and tires set ablaze by protesters at various entrances to Beirut from early morning.

"We've closed off all the roads today to tell everyone: It's over, we have nothing left to lose," said Pascale Nohra, a protester blocking the northern road into Beirut. "We've even lost our dignity."

She said it was time to revive the mass cross-sectarian protests of late 2019 against an entrenched political class, that has dominated the country since the 1975-1990 civil war.

"We want everybody to show solidarity," said the former real estate worker. "We need to return to the streets and revive our revolution."

Another protester, Anthony Doueihi, said: "The people, this country are dying, collapsing.

"If we don't come out now, these corrupt barons will continue ruling us for another thirty years."

Similar protests were held Monday in the northern port city of Tripoli.

In the southern village of Abbasiyeh, a man poured gasoline on his body and tried to set himself on fire before civil defense members and soldiers intervened and sprayed his body with water.

Lebanon's currency has lost more than 80 percent of its value since the fall of 2019, plunging to an all-time low of nearly 11,000 pounds to the greenback.

In a country that imports most of its food, state subsidies have until now helped to partially stem the inflation.

But with foreign currency reserves dwindling, the authorities have warned they will not be able keep them up much longer.

As Lebanese brace to slide deeper into poverty, footage circulated last week of a fight in a supermarket over subsidized milk formula.

The Crisis Observatory at the American University of Beirut warned that the situation would likely worsen.

"If the repercussions of the pound's plunge in value are evident in the deterioration of Lebanese and other residents' buying power, and in feverish, sometimes violent competition over subsidized goods in some shops, the worst is still to come," it said in a report.

President Michel Aoun said blocking roads was "unacceptable", and security and military forces would ensure they were opened to traffic.

He called for authorities to clamp down on "the manipulation of food prices."

Mohammad Faour, a research fellow at University College Dublin, said the pound's free-fall was a "continuation of a clear downward trend in the exchange rate since the very beginning of the crisis, and the concurrent policy inaction".

Lebanon has been without a fully functioning government since a massive blast in Beirut's port last August killed more than 200 people and ravaged swathes of the capital.

The government stepped down after the disaster, but the political class cannot agree on a new cabinet to launch sweeping reforms desperately needed to unlock billions in international aid.

The international community has repeatedly demanded reforms in the public and banking sectors, but analyst Mike Azar argued they were unlikely any time soon.

"It is easier for the political leadership to do nothing, push the losses slowly onto the public, and rule over a much poorer country, than to do any of the reforms," he said.

That is because the reforms needed would "hit directly at the political parties' clientelist system" as well as influential bank shareholders or large depositors, he explained.

Monday's protests came on the same day as Lebanon entered a new phase in easing a lockdown aimed at keeping Covid-19 infection rates in check.

A major medical oxygen supplier called on protesters to allow its trucks through to reach hospitals treating patients with serious cases of coronavirus.

Lebanon has recorded almost 400,000 coronavirus cases and more than 5,000 deaths.

Suleiman Haroun, President of the Syndicate of Hospitals in Lebanon, meanwhile told The Associated Press that after a two-day weekend when there is no oxygen distribution, some hospitals are running low and urgently need supplies, especially to treat COVID-19 patients.

"This is not a joke. It is a matter of life and death," Haroun said urging protesters to allow vehicles carrying supplies of oxygen to pass. There are several oxygen plants around Lebanon and they supply hospitals throughout the country, including some in remote areas.

The most useful protest is similar to March 14 2005 with only one slogan - Political Neutrality & No arms outside armies - Keep in mind in 2005 despite opposition of Shia duo, Cedar Revolution I million plus demonstration was extraordinarily successful and life changing. It should be duplicated in million plus Cedar Revolution II peaceful revolution. This requires preparation and a political-economic-judicial reform plan jointly developed by Thawra and Diaspora technocrats in preparation for next elections. Meanwhile all violent demonstrations, while their reasons understood, are counter productive. There is hope as Lebanon without occupation by Hizb arms and its puppet has the best potential of any country in the Middle East.