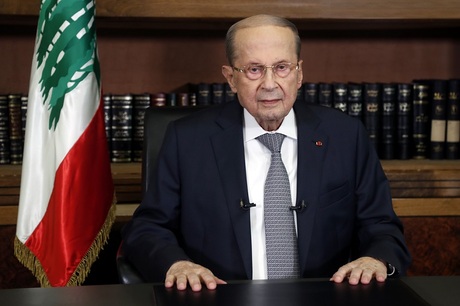 President Michel Aoun called on PM-designate Saad Hariri on Wednesday to “make way” for someone else to form the new government if he is incapable of carrying out the mission.

“Your suffering has reached levels that no people can bear,” Aoun said in an address to the nation, addressing the Lebanese people.

“I had preferred silence to allow for solutions at all levels and to avoid any event resulting from sharp bickering and divisions,” the president added.

“Out of my oath, and after PM-designate Saad Hariri presented a draft cabinet line-up that does not meet the minimum requirements of national balance and respect for the National Pact, which plunged the country into the tunnel of paralysis, I invite him to the Baabda Palace, for the immediate formation of the government in agreement with me and according to the applicable constitutional mechanism and standards for the formation of governments, without excuses or delay,” Aoun went on to say.

The president said Hariri should act out of his “constitutional responsibility and humanitarian and national conscience.”

“Such popular suffering will not be merciful towards those responsible for obstruction, elimination and the perpetuation of the caretaking phase,” Aoun added.

“This is a determined and honest call for the PM-designate to immediately choose one of the two available options,” the president said, warning that all posts would become useless should the country “collapse.”

Hariri was chosen to form a new Cabinet in late October but so far political bickering and disagreements between him and Aoun have delayed the formation.

Both Aoun and Hariri have accused each other of obstruction.

While the rivals of Aoun and his Free Patriotic Movement have suggested that the president's camp is seeking a share that would allow it to control the government's decisions, Aoun and his camp have accused Hariri of infringing on the president's jurisdiction in the cabinet formation process.

Not that I like or support Saad Hariri, he isn’t the one blocking the formation of a capable technocratic government. The people ruining the country are the persons currently in charge, Michel Aoun and Diab and his incompetent government.

Aoun and Bassil are premeditated assassins of a country and the future of its children. They destroyed a country that had by far the best potential in the region. They should rot in prison. They sold Lebanon and our freedom and independence to the criminal Iranian regime. Since 2000 Iran goal was for Hizbollah to invade and occupy the south to install Iranian high precision rockets to create a balance of terror with Israel for the sole purpose of being an attack dog for Iran’s nuclear aim and regional hegemony. This is obviously a kiss of death to Lebanon that prospers with its tourism, democracy and freedom and historic attractiveness to western firms. Aoun knew the risks but sold Lebanon for 30 pieces of silver for personal benefit. History won't be forgiving. Anyone supporting Aoun or Hizb is a traitor.

how true that comment is, this is not an a political alliance of two parties but an alliance between an iranian terrorist organisation and a subservient political party of convenience ie. I'll support you provided you pay me in us dollars. What a shame a maronite christian betraying his country for no more than money.

Salim Jreissati and Gebran Bassil are a couple evil men. Was it really worth it, waking the senile deserter up, washing him and putting him is a suit to barely look presentable just to make a less than 4 minutes televised speech and say nothing? They could have simply called Hariri up and told him to you come to Baabda the president want to see you. Isn't that was Hariri had been calling for since the last visit? The country is going to hell and those despicable creatures are still posturing!

Accept the Government or Leave with your stench.

Just hand him over to the people. They will do him justice.