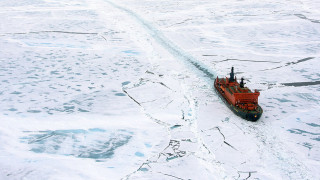 The Suez Canal jam has highlighted the importance of further developing Russia's Arctic shipping route, which is increasingly accessible due to climate change, a senior Russian diplomat said on Friday.

Russia has invested heavily in the development of the Northern Sea Route that allows ships to cut the journey to Asian ports by 15 days compared with the conventional route through the Suez Canal.

As the passage along the Siberian coast becomes increasingly free of ice due to climate change, Moscow is planning to use it to export oil and gas to overseas markets.

"The incident that has taken place in the Suez Canal will force everyone to think about the need to diversify strategic maritime routes as the volume of maritime traffic grows," Russia's ambassador-at-large Nikolai Korchunov told the Interfax news agency.

"Obviously it's necessary to think about how to efficiently manage transportation risks and develop alternative routes to the Suez Canal, first and foremost the Northern Sea Route," said Korchunov, who is Russia's point person for international Arctic cooperation.

"The appeal of the Northern Sea Route will grow both in the short- and long-term. It has no alternative," he added.

Russia already seized on the Suez Canal's woes on Thursday to mockingly offer its Arctic route as an alternative.