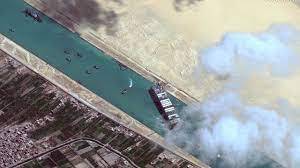 A virus visible through only the most powerful microscopes and a huge container ship stuck in the Suez canal visible from space highlight how fragile the "just-in-time" global trade system can be.

Businesses no longer hold large stocks of materials and parts at great expense, instead they rely on regular and even daily shipments of what they need.

But it has a potentially key weakness -- it only needs one link to break and the whole supply chain quickly comes to a halt.

As demonstrated by the stranding of the massive Ever Given container ship in the Suez Canal which blocked one of the world's most important shipping channels for a week until it was freed on Monday.

The passage provides a shortcut for everything from oil to manufactured goods and livestock to travel between Asia and Europe, and any deal creates headaches for retailers and suppliers around the world.

"It is not that we have things from all over the world, it's that they arrive the day that you need it," Goldin said.

The coronavirus pandemic had already forced companies to think about their supply chains given the massive disruption caused, especially early last year.

Auto production has been disrupted across the world due to a shortage of semiconductors, which have been in hot demand as the pandemic fueled demand for crucial microchips used in consumer electronics.

A fire this month at a factory of Japanese chip manufacturer Renesas has threatened to worsen the shortage, with the company saying Tuesday that it could take three to four months to restore full capacity.

Resilience is now the watchword, having more than one supplier and then closer to home base so as to minimize the impact of lockdowns and restrictions imposed to curb the virus.

A "fourth industrial revolution" driven by technology "is expected to make local production efficient and do away with inefficient and costly supply chains," Innes said.

Governments have learned the lesson from early shortages of medical equipment whose manufacture had been moved almost entirely offshore, mostly to China and Asia to take advantage of cheaper labor there.

The price to be paid however when the crisis broke outweighed any such savings, sparking a political backlash as hospitals scrambled for protective clothing and basic equipment, and the public demanded action.

Against this backdrop, governments and businesses alike are bringing production back home where it may be more expensive but at least is more secure.

"How much just-in-time do you want to be?," Soren Skou, head of giant Danish shipping line Maersk, told the Financial Times in an interview Monday.

"It's great when it works but when it doesn't, you lose sales (and) there's no just-in-time cost savings that can outweigh the negative of losing sales," Skou said.

The way the pandemic has evolved is likely to put additional pressure on global transport links as house-bound, locked-down consumers drive an explosion in online demand.

If and when restrictions are eased -- as in Britain or the U.S. on the back of a robust vaccination rollout -- there is likely to be a huge wave of relief demand which will test the system anew.