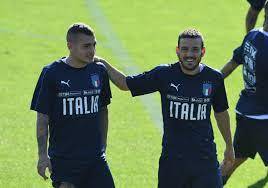 Paris Saint-Germain duo Alessandro Florenzi and Marco Verratti on Tuesday were both ruled out of Italy's 2022 World Cup qualifier against Lithuania in Vilnius, just eight days before the French giants' Champions League clash with Bayern Munich.

Full-back Florenzi is suffering from muscle fatigue, and midfielder Verratti has a thigh injury, the Italian Football Federation announced on the eve of Wednesday's qualifier.

Key midfielder Verratti also suffered thigh injuries last October and last month, and has spent time on the sidelines this season due to a foot problem and after contracting coronavirus.

Roberto Mancini's Italy are top of qualifying Group C after winning their opening two games against Northern Ireland and Bulgaria, both with a 2-0 scoreline.

Freiburg winger Vincenzo Grifo has also been ruled out because of health restrictions for those entering Germany from Lithuania.