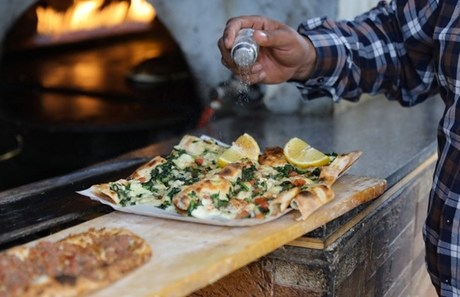 Scattering spinach and hot chili onto fluffy flatbread in Lebanon's capital, 54-year-old Abu Shadi bemoans better times before the economic crisis when all Lebanese could afford his simple meals.

The veteran baker is famed for his take on Lebanon's manousheh, a circle of freshly baked dough sprinkled with anything from thyme to meat, then folded in half and rolled in paper to go.

But Lebanon's worse financial crunch in decades has sent prices soaring, and Abu Shadi says many of his customers of three decades can no longer afford even this modest pastry.

"Since I started working at this oven in 1987, it's been nothing but goodness and blessings. But today, all that has gone," he said.

On the phone, he warmly receives a stream of orders.

He jokes with a customer as he waits for his breakfast, and from inside his shop waves at an acquaintance as they drive by in their car.

Looking up from time to time from the flatbreads he heaps with filling, he greets the old and young as they walk by.

He hums loudly, only pausing to compliment an elderly lady on blonde hairstyle.

But nowadays, Abu Shadi turns down the heat in his oven once he has baked enough manaeesh (plural form of manousheh) to save on gas.

"The manousheh is both a father and mother to the Lebanese people. It's food for the rich and the poor," he said.

"Sadly at the moment, the poor can no longer afford to eat it," he said.

Tens of thousands have lost their jobs or a huge part of the income in the financial crunch, which has caused the Lebanese currency to lose more than 85 percent of its value.

The new price is less than $0.50 at the black market rate for a lucky few with access to dollars, but most Lebanese earn wages in the local currency -- and see that as up to five times the normal price.

The baker says that for three decades, customers have streamed in at weekends, ordering up to seven or eight manaeesh to take away for a traditional family breakfast.

But over the past few months, those customers have stopped coming altogether.

"Manaeesh are now only for the well off," he said.

But Abu Shadi has been forced to increase his prices to cover the increasing cost of all supplies from flour and cheese, to the paper he wraps the manousheh in.

"We used to live a cushy life, but people's living situations have really slumped," he said.

But one customer, Mahmoud, says he will continue to buy the bread he has grown to love, "whatever the cost."

"Whoever is used to Abu Shadi's manaeesh cannot replace it," he said, between bites of one filled with cheese and meat.

Abu Shadi has been helped by the fact that his customers keep coming back.

But he says he has not been forced to close like other small bakers since he does the job on his own.

"After all this time and effort, I'm only still going because I work for myself," he said.

"The money others pay to their staff, I keep to live off."

"I have nothing but my hands and God."