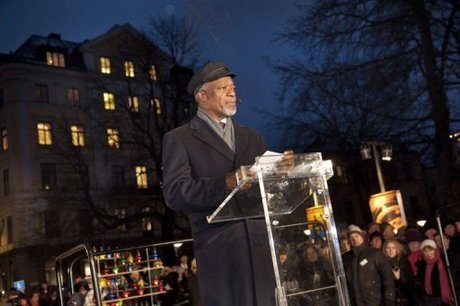 Nazi death camp survivors marked Holocaust Remembrance Day in Poland on Friday, while in Austria guests at a far-right ball were accused of "dancing on Auschwitz graves".

In the United States, President Barack Obama and his possible opponent in the November vote Mitt Romney remembered the victims, while Norway and Romania acknowledged their roles in the World War II horror.

Survivors joined Israeli and Polish officials at ceremonies for the 67th anniversary of the liberation of Auschwitz-Birkenau at the site of the former camp where the Nazis killed more than a million people, mostly European Jews.

"This place remains a wound on the soul of Europe and the world," Poland's President Bronislaw Komorowski said.

Participants also mourned the passing of Kazmierz Smolen, an Auschwitz survivor who after World War II helped found a Polish state-run memorial and museum created at the site and served as its director from 1955 to 1990.

"He died in hospital today. We learned this sad news at the very moment that the ceremonies were under way," museum spokesman Pawel Sawicki told AFP.

On the eve of the memorial day, Turkey became the first Muslim country to air "Shoah", an epic 1985 French documentary on the Holocaust, nationwide.

State-run Turkish Radio and Television's said the channel would broadcast the nine-hour-plus documentary in six episodes, one part every week.

"This day of remembrance... reminds us of the importance of drawing the right lessons on combatting racism, xenophobia and anti-Semitism," The Turkish foreign ministry said in a statement.

The date was also chosen by Austrian right-wing student fraternities to hold their annual ball in Vienna, which was expected to be attended by several European far-right leaders, including French National Front head Marine Le Pen.

Police expected around 3,000 anti-fascist demonstrators outside the venue, the Habsburg dynasty's imperial Hofburg palace, with press reports saying coaches would be bringing protestors in from other European countries.

The timing and venue have sparked outrage among those mourning Holocaust victims but organizers of the ball, which will be attended by figures whose parties have in the past been accused of revisionist and anti-Semitic views.

"It is all the more regrettable and perfidious that today of all days, people will dance on the graves of Auschwitz," Eva Glawischnig, head of Austria's Green party, said at a Holocaust commemoration ceremony.

Obama pledged to celebrate the resilience of Holocaust survivors and to stand strong against those who commit modern-day atrocities and against what he said was "the resurgence of anti-Semitism."

"Together with the State of Israel, and all our friends around the world, we dedicate ourselves to giving meaning to those powerful words: 'Never Forget. Never Again.'"

Romney, who has accused Obama of watering down strong U.S. support for Israel, argued that "it is not enough merely to reflect on those horrors and the evil that brought it about."

"At a moment when the state of Israel is under threat from violent terrorists, from tyrants seeking nuclear weapons, and from a campaign to deny the legitimacy of a Jewish state, the United States must stand shoulder to shoulder with our ally in its quest for peace and security."

Meanwhile Norway's Prime Minister Jens Stoltenberg said it was "time for us to acknowledge that Norwegian policemen and other Norwegians took part in the arrest and deportation of Jews."

After Nazi troops invaded Norway in 1940, the Scandinavian country was ruled by a collaborationist government headed by Vidkun Quisling, whose name became synonymous with "traitor" and who was executed after the 1945 liberation.

In Romania, President Traian Basescu also said it was important for his country to recognize its role in the Holocaust.

"Acknowledging the tragedy of the Holocaust... represents an essential element for the evolution and the maturity of a democratic nation", he said.

Between 280,000 and 380,000 Romanian and Ukrainian Jews died during the Holocaust in Romania and the territories under its control.