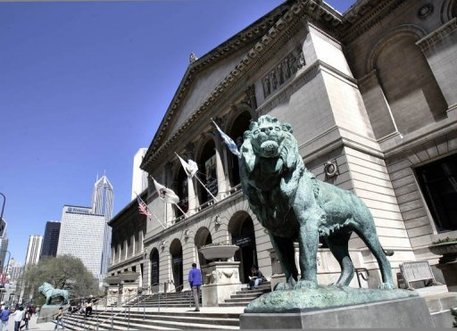 The Art Institute of Chicago has won a major grant from the government of India in honor of a landmark 1893 speech there by a monk, Swami Vivekananda, who introduced Hinduism to the United States.

The $500,000 grant will be signed over Saturday at the opening of a major exhibit of the paintings and drawings of Rabindranath Tagore, an Indian poet, playwright, musician, and philosopher who was the first non-European recipient of a Nobel Prize for literature in 1913.

"It is a supreme honor to be recognized by the Government of India as a partner in the preservation, exhibition, and promotion of India's cultural heritage," said Art Institute director Douglas Druick.

The Vivekananda Memorial Program for Museum Excellence is designed to foster professional exchange between the Art Institute and various museums in India over the next four year.

It is the first time a U.S. museum has received a grant from the Indian government.

The young Hindu monk electrified the World's Parliament of Religions, which was held on the site of what is now the Art Institute in conjunction with the World's Fair.

Opening with the words "Sisters and brothers of America," Vivekananda offered an impassioned plea for religious tolerance and understanding and lamenting the role religion played in war and bloodshed.

The block of Michigan Avenue that the Art Institute occupies was named the Honorary Swami Vivekananda Way in 1995 by the city of Chicago and the museum has also marked the site of his address with a plaque that will be rededicated Saturday.

"It means a lot to Indians who view Vivekananda as the first great ambassador of Indo-American cultural friendship," Culture Secretary Shri Jawhar Sircar said in a statement.

"I am sure that the Vivekananda Memorial Program for Museum Excellence will also bring us closer, for our mutual benefit."

I would like to visit this sacred place sometine in June'13,God willing.