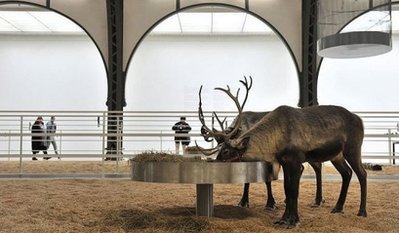 The "Soma" show by Belgian-born artist Carsten Hoeller which wrapped up Sunday was a runaway hit for the Hamburger Bahnhof museum of contemporary art, a spokeswoman for the state-run museums in the German capital said.

Soma was an ancient Hindu mythical potion known among Vedic nomads in North India in the second millennium BCE. It was believed to impart happiness, invincibility and even access to the divine.

Hoeller borrowed from modern studies to try to recreate Soma, using the urine of reindeer that have eaten hallucinogenic fly agaric mushrooms.

"What you can learn from this exhibition is -- and this is very important to Carsten Hoeller -- a very personal matter," curator Dorothee Brill told AFP.

"When you enter you think it's giant and spectacular, and it is, but I think what Carsten Hoeller is getting at is very personal and intimate."

For the ultimate experience, visitors willing to pay 1,000 Euros (1,350 dollars) could spend a night at the museum amid the animals, bedding down on a perch from which they could take in the sights, sounds, smell and even taste of the unusual installation.