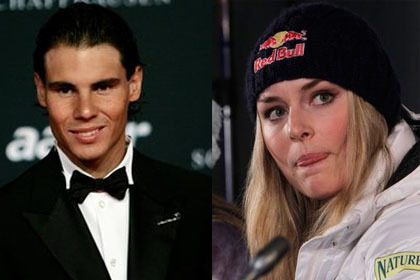 Vonn, winner of the women's downhill at the Vancouver Games and a third consecutive overall World Cup title, took the sportswoman's award. High jumper Blanka Vlasic and tennis players Serena Williams, Kim Clijsters and Caroline Wozniacki were among the other nominees.

PGA champion Martin Kaymer, currently ranked No. 2 in the world, won the Breakthrough of the Year Award.

"That is pretty cool. This trophy, this award," said Kaymer, who won this year's Abu Dhabi Championship. "Every time I come to Abu Dhabi, it's fantastic. Here is pretty much where everything started for me. In 2008, I had my first European Tour win."

Kaymer paid tribute to his brother and sometime caddie, Philip, calling him "the most important person in my life."

The victorious European Ryder Cup team won the Spirit of Sport Award. Accepting the award was captain Colin Montgomerie, who dedicated it to Seve Ballesteros, the five-time major winner and former No. 1 who has been suffering from a brain tumor.

"We won this because of him," Montgomerie said. "He spoke to us on the phone from his home and Martin (Kaymer) as a rookie can tell you that the room was silent."

The winners are chosen by 46 sports stars who make up the Laureus sports academy.

Nadal is recovering after injuring a leg muscle during his quarterfinal loss at the Australian Open in late January, which ended his hopes of holding all four Grand Slam titles at once.

"It was an emotional season especially after coming from a hard time in 2009," Nadal said of his injury problems. "I had a hard time in Australia and then I started playing my best tennis. Winning in 2010 during the Roland Garros final ... all the problems went out and I could play with a lot of confidence."

Vonn is meanwhile preparing for the Alpine skiing world championships in Germany, where she is seeking to defend her super-G title.

Proceeds from the awards ceremony underpin the work of the Laureus Sport for Good Foundation which supports 83 community sports projects around the world.