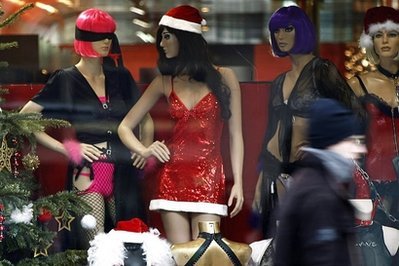 A shop in the U.S. state of Alabama on Tuesday launched a Valentine's Day offer it hopes will trigger a large response in a limp economy: customers can swap their guns for sex toys.

"In today's economy, this is a way of helping people who may feel they can't afford something for Valentine's Day," said Sherri Williams, the owner of the "Pleasures" sex toy shop, where assorted erotica during the next week can be obtained in exchange for cast-off firearms.

A video posted on its website said the shop, housed in an old bank building in Huntsville, "is trading guns off the street for fun between the sheets."

As soon as Pleasures opened its doors on Tuesday, a customer came in and exchanged an Iver Johnson revolver for a $40 gift certificate to be spent in the shop, which stocks everything from steamy videos to naughty negligees.

The gun was inspected by licensed gun dealer and gunsmith David Smith, who happens to be Williams' husband.

Guns can be exchanged at Pleasures from Tuesday until February 15, the day after Valentine's Day.

Firearms found to have been stolen or used in a crime will be handed over to the police, while others will be auctioned off, with proceeds going to victims of gun violence, said Williams, who said she is not looking to make money out of the deal.

"I'm in it to help people enjoy Valentine's Day in a tough economy," she said.

"I'm also in it to get guns off the street -- to take them out of the hands of people who would potentially do harm with them, and put them in the hands of collectors."

Williams conceded that the guns could be resold at auction, in which case they might end up back on the streets, but said the effort still is worthwhile.

"We might just change one person's mind," she said.

"You never know, maybe there will be someone who says, 'I've got this gun that I could go rob a liquor store with, or maybe I can get me a blow-up doll for Valentine's Day, instead."