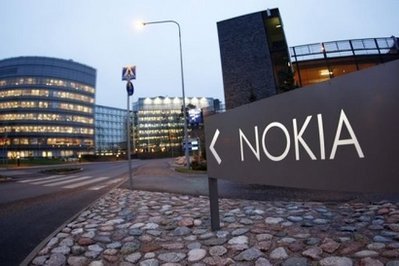 Nokia's chief executive Stephen Elop -- a former Microsoft executive who in September became the first non-Finn to lead Nokia -- also announced changes to the company's executive board in his new strategic plan.

The announcements were met, however, with sharp disappointment on the stock market, as Nokia's share price plummeted 9.44 percent to 7.39 Euros ($9.99) on the Helsinki Stock Exchange which was down 0.87 percent.

"Nokia is at a critical juncture, where significant change is necessary and inevitable in our journey forward," said Elop, shortly before holding an investors briefing in London on the new strategy.

He said the two firms would "combine ... strengths to deliver an ecosystem with unrivaled global reach and scale. It's now a three-horse race."

Analysts said the partnership would bring Nokia the benefit of Microsoft's massive resources and experience in cloud computing, essential to next-generation devices, while Nokia could help Microsoft get a better foothold in the portable devices market.

Others such as Espirito Santo Investment Bank pointed out that the Windows' operating system had "failed to gain traction" and that a partnership with Google -- whose successful Android operating system had also been pegged as an option for Nokia -- would have been a better choice.

"There are so many big questions still unanswered -- what's the timetable, for instance? Nokia is starting from pretty much zero ... I still wonder how quickly can they get the new strategy moving," Pohjola Bank analyst Hannu Rauhala told Agence France Presse.

The company warned in a separate statement on Friday that 2011 and 2012 will be "transition years" as it gets the strategy up and running.

Nokia also said that it was creating a new 13-member executive board, with some new faces and the immediate departure of Alberto Torres, who was in charge of Nokia's MeeGo project.

But by far the biggest change is the tacit admission by Nokia that its flagship Symbian has failed to be as competitive as they had hoped, illustrated by the fact that Microsoft's platform is now Nokia's operating system of choice.

With Microsoft Phone as the primary Smartphone platform, Symbian system will become a "franchise platform" as the company attempts to "retain and transition" its 200 million Symbian-powered mobile phone customers, it said in a statement.

MeeGo, on the other hand, will be kept for long-term development for next-generation devices.

Nokia has still not shipped any Smartphones with MeeGo although the company said it hoped to have one MeeGo-related product on shop shelves later this year.

Nokia has over the past two years seen increasing competition in the lucrative Smartphone sector from Apple's iPhone, Research in Motion's Blackberry and by Android-operated phones.

In a memo to staff that emerged the same day, Elop warned Nokia was standing on a burning platform," surrounded by a "blazing fire" of competition.