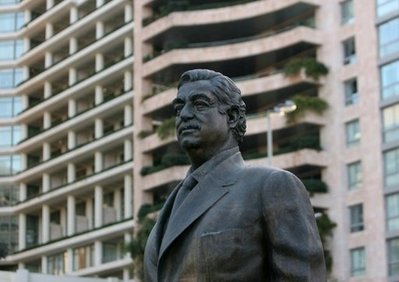 Six years after Rafik Hariri's assassination galvanized Lebanon, sparking mass protests seen in Beirut as a model for Egypt's uprising, his legacy is faltering in a country torn by a U.N. probe of the murder.

The camp of outgoing Prime Minister Saad Hariri, son of the slain five-time premier, has since "suffered a number of setbacks," said Asaad AbuKhalil, professor at California State University and author of a political blog.

"But it would be too soon to declare its death because the factors that gave rise to the movement remain," AbuKhalil told Agence France Presse.

Monday marks the anniversary of the February 14, 2005 bombing that killed Rafik Hariri and 22 others, setting in motion a wave of demonstrations demanding the withdrawal of Syrian troops.

Many Lebanese see the events as having set the precedent for the fall of Egypt's President Hosni Mubarak and for last month's revolution in Tunisia.

The protests forced Damascus to withdraw its troops under massive international pressure after 29 years of military domination over Lebanon, igniting a sense of euphoria among millions that was to prove short-lived.

For the past two years, a bitter political battle has revolved around the Special Tribunal for Lebanon (STL), which expected to implicate Hizbullah members in the Hariri murder.

But today the tables have turned for Hariri and his Western-backed allies.

"The deepest cut over the years has been the issue of the tribunal," Noe added. "Those forces opposed to the tribunal have been able with a fair degree of success to undermine its credibility."

March 14's popularity has waned as Damascus regains sway over its smaller neighbor and Saad Hariri -- whose unity government was toppled last month in a feud over the tribunal -- finds himself in the opposition.

Hizbullah and its allies on January 12 withdrew their ministers from a unity government, forcing its collapse, and tapped Sunni billionaire Najib Miqati to head the next government.

Even before its formation, Miqati's cabinet has earned the moniker "Hizbullah's government" from the Hariri camp, who say they will not join.

Prior to the cabinet breakdown, Hizbullah waged a relentless and, experts say, relatively successful public campaign to discredit the STL and the Hariri government that backed it.

"The battle has long been about the Lebanese public's perception of the tribunal's credibility and legitimacy," said Elias Muhanna, author of another political blog and a PhD candidate at Harvard University.

"And I think that (the Hizbullah camp) has been more adept at shaping that perception."

The Syrian- and Iranian-backed group, which dismisses the STL as a U.S.-Israeli conspiracy, months ago revealed what it says was evidence that its archfoe Israel had toyed with telecom evidence used in the case.

A local pro-Hizbullah television channel, al-Jadid, has also aired a series of leaked recordings of the outgoing premier's interviews with U.N. investigators dating back to 2007 in which he called Syria's President Bashar Assad an "idiot."

"I would not underestimate the impact of the ... leaks in that they showed the extent to which the actual legal proceeding of the position of the Hariri court had been tainted by utter unprofessionalism," said AbuKhalil.

"The way Hariri spoke, so vulgarly, made him ... unseemly to some," he added. "Here was Hariri rallying his community against Syria, only to have his followers witness how he crawled right back to Syria."