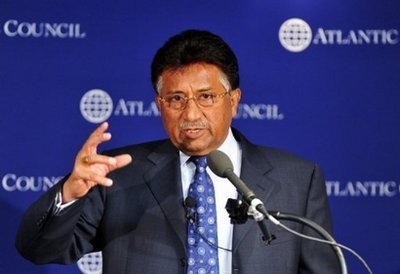 He said that "a joint investigation team that had been formed to probe the assassination said in its report Musharraf was involved in the case and was equally responsible."

"The report said it was a broad conspiracy involving Pervez Musharraf, two police officials and terrorists," Ali said after the closed-door hearing that took place in Rawalpindi's Adiala prison.

Musharraf, who was president when Bhutto was killed in 2007, is in self-imposed exile in London and is unlikely to return to Pakistan.

Asked what would happen if Musharraf did not appear in the court on the next date of the hearing, the prosecutor said: "We will see when the time comes."

Musharraf will not return to Pakistan to comply with the arrest warrant, his spokesman in London said Saturday.

"No, he won't be going back for this hearing," Fawad Chaudhry told AFP, adding that the warrant was "totally ridiculous."

In December, police arrested two senior police officers, Saud Aziz and Khurram Shahzad, for alleged dereliction of duty over the assassination of Bhutto after a court issued their arrest warrants.

Aziz, who was city police chief at the time of the killing, and Shahzad, another senior policeman in Rawalpindi, had been arrested for their "failure" to protect Bhutto.

Bhutto was killed in a gun and suicide attack after addressing an election campaign rally in the garrison city, near the capital Islamabad, on December 27, 2007.

Meanwhile, a man detonated explosives as army troops prepared to storm his hideout in northwest Pakistan on Saturday, killing himself and wounding at least three soldiers, a senior army official said.

The blast occurred outside the town of Bhat Khela in Khyber Pakhtunkwa province after troops acting on a tip from residents surrounded a militant hideout and told those inside to surrender, Brig. Saeed Ullah said. Soldiers killed a second militant in the shootout that followed the explosion.(AFP-AP)