3 Dead in Taliban Attack on Police HQ in Kandahar 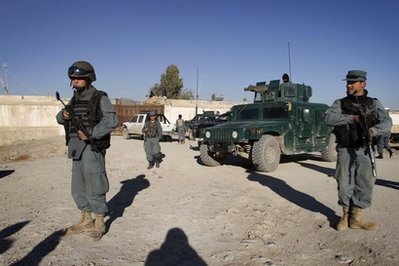 Three people including two policemen were killed and 26 wounded Saturday in an attack claimed by the Taliban on police headquarters in the volatile Afghan city of Kandahar.

A hit squad stormed a wedding hall across the road at around midday (0730 GMT) and opened fire on the police building amid reports of a total of up to six explosions in Kandahar.

An Agence France Presse reporter at the chaotic scene saw attackers firing rocket-propelled grenades, AK-47 assault rifles and machine guns from the sixth floor of the wedding hall at the police headquarters.

He later said that police had entered the building and there had been two loud explosions.

Zalmai Ayubi, a spokesman for the governor of Kandahar, said three people, including two policemen, had been killed in the violence and 26 injured. The wounded included nine children, he added.

"Zarnegar hall, which is located on the other side of the road, 50 meters (160 feet) away from Kandahar police HQ, has been the source of the shootings on the police HQ," Ayubi said.

A spokesman for the Taliban, Yousuf Ahmadi, said the group, for whom Kandahar is a traditional stronghold, was behind the attack.

"A team of our friends consisting of six men has entered the Zarnegar hall and have taken it under control," he told AFP.

Most people in the city are staying indoors for fear of being caught up in the unrest as the violence continues, the AFP reporter said.

A police officer at the scene said there had been six explosions in the city.