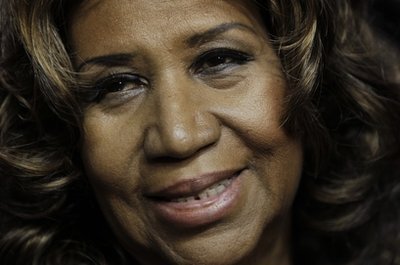 Lady Gaga was among early acts at the three-and-a-half-hour show, appearing in inimitable style from an egg to sing "Born this Way," while other acts on the bill included Katy Perry, rapper Eminem and teen sensation Justin Bieber.

The glittering gala began with Christina Aguilera, Jennifer Hudson and Florence Welch of Florence and the Machine belting out a string of Franklin's hits including Respect, Think and "(You Make Me Feel Like) a Natural Woman."

Franklin, 68, has been mostly out of the public eye since she had surgery in December for an undisclosed ailment. Local media reported that she was battling cancer, after canceling concerts in October citing "health reasons."

On Sunday she sent a video message to the Grammys, played after the tribute section to her, thanking everyone who sent cards, flowers and "most importantly your prayers" when she was in hospital.

"I wish that I could have been you all tonight, but since I couldn't, next year, OK?" said Franklin, in a white dress and looking slimmed down from recent years.

While showcasing new talent, the glittering 53rd Grammys event will also pay tribute to past greats including "The King of Rock 'N Soul" Solomon Burke, who died last year.

Dylan, appearing at the Grammys for his fifth time, was to perform with country-tinged Brits Mumford and Son and folk-rock band the Avett Brothers in a special salute to acoustic music at the Staples Center in downtown Los Angeles.

The Grammys are the music industry's equivalent of the Oscars, the climax of Hollywood's annual awards season that this year takes place in barely two weeks' time, on February 27.

Front-runners for Grammys glory include Eminem, nominated in 10 categories including best album and best song, in what could cap a comeback year for the once-troubled rap star.

The singer -- real name Marshall Bruce Mathers III -- dropped out of music-making in the middle of the past decade as he battled with drug problems. He returned with the album "Relapse" in 2009, before 2010's "Recovery."

"Recovery" was the top-selling album of 2010. Song "Love the Way You Lie" stood as number one in the charts for seven weeks, the year's second-longest run behind Ke$ha's "Tik Tok," while "Not Afraid" also hit the top spot.

Perry is also in the running for Best Album along with Lady Gaga, Arcade Fire and Lady Antebellum.

Nominations in the main categories include:

- Record of the Year: "Nothin' on You" by B.o.B with Bruno Mars; "Love the Way you Lie" by Eminem featuring Rihanna; "F*** You!" by Cee Lo Green; "Empire State of Mind" by Jay-Z and Alicia Keys; and "Need You Now" by Lady Antebellum.

- Best Album: "The Fame Monster" by Lady Gaga; "Recovery" by Eminem; "The Suburbs" by Arcade Fire; "Need You Now" by Lady Antebellum; and "Teenage Dream" by Katy Perry.