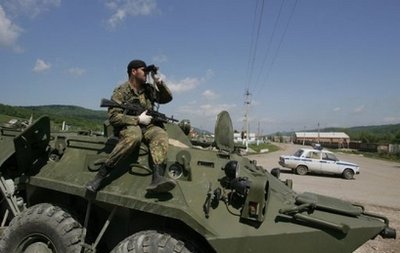 A previous toll on Friday was 13 killed in the deadliest unrest in months.

Federal forces said they used combat helicopters and artillery against at least 30 gunmen hiding in the heavily forested hills between Chechnya and the Caspian Sea region of Dagestan.

Chechnya's president, Ramzan Kadyrov, said that seven fighters had been "wiped out" in "special operations against illegal armed bands."

"Unfortunately there have been losses," Russian news agencies quoted Alhanov as saying Saturday. "During a special operation which lasted four days, 24 policemen were wounded and 17 killed."

The violent flare-up in the mostly Muslim region comes weeks before Russia holds a March 4 presidential election in which Prime Minister Vladimir Putin is set to recapture the Kremlin seat he held in 2000-2008.

Putin's first term as president was largely defined by the brutal campaign in Chechnya that he began in 1999 in response to a mysterious wave of apartment block bombings that the authorities blamed on guerrillas.

Moscow had stamped its own rule on Chechnya by 2000 and has since poured enormous resources into rebuilding a region that has been one of Russia's poorest and most restless since Soviet times.

But the Chechen insurgency movement -- once grounded in a drive for independence -- has since gained Islamic roots and spread to other republics such as Dagestan on the east and Kabardino-Balkaria to the west.

Russian and rebel sources said the latest standoff first erupted on Monday and resumed Friday morning after an overnight lull.

Kadyrov is a former rebel turned Moscow supporter whose tough security crackdown has been accompanied by widespread allegations of rights abuses.

Dagestan is the region's largest republic and witnessed a portion of the fighting during the second Chechen campaign.

The region now experiences almost daily shootings and bombings that officials blame on local criminals and Islamists with links to Chechnya.

Thanks for the article, I have a couple of points:

1) The drive for independence didn't start in the 90's and does not have Islamic roots, Islam just happens to be the religion of the majority of Caucasian people.

For hundreds of years Russia has been trying to conquer and subdue the people of the Caucasus by killing them and forcing entire populations out of their land (e.g. the Circassians in the North Western Caucasus).

The Caucasus is nowadays part of Russia on the map, this was only achieved through the murder and horror that Russia carried out against the Caucasus.

The people of the Caucasus are not Russians, but a completely different peoples.

2) Ramzan Kadyrov is the son of the well known traitor Ahmad Kadyrov, the mufti of Chechnya who was just a puppet for Russia. Likewise, Ramzan is a traitor for Chechnya and has committed war crimes against his fellow Chechens.

Totally agree with FreeKavkaz's comments. Good to see that the rebels are still in the mountains fighting for a Free Caucasus. Russian Troops get out of the Caucasus! Shame on the Olympic authorities for hosting the winter games on stolen Circassian Land where the holocaust of Cirsassian People too place. Freedom for the Caucasus