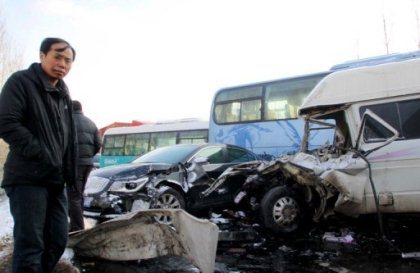 At least 28 people have been killed and dozens injured in three bus crashes in one day in southern China, state media reported Sunday.

The injured were all taken to local hospitals, and the cause of the crash is under investigation, the report said.

The bus, which was carrying 37 passengers, started its journey in the city of Chuxiong and was bound for the tourist town of Dali.

In neighboring Guizhou province, 13 people were killed and 22 injured when the tire of the bus they were riding in blew out, causing the vehicle to career off the road, Xinhua said.

In the southern Guangxi region, six people were killed when their bus collided with a truck, Xinhua said.

China's roads are among the world's most dangerous, with traffic laws and safety widely flouted.

According to police statistics, about 70,000 people die and 300,000 are injured in road accidents every year in China, Xinhua said.

But the World Health Organization said in a recent study the true figure is almost twice that number, citing hospital and medical clinic statistics.