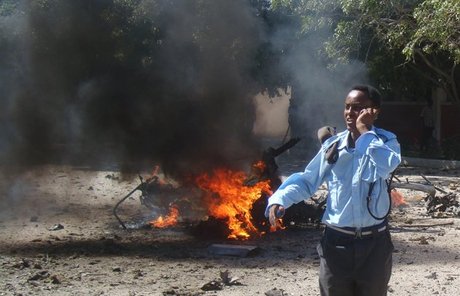 Somalia's disparate leaders have agreed on the basic structure of a new parliament and government to replace the fragile transitional body that has failed to bring peace to the war-torn country.

Somalia's president, the presidents of the breakaway Puntland and Galmudug regions, and the commander of the powerful anti-Shebab militia Ahlu Sunna Wal Jamaa signed the deal under U.N. auspices.

The accord proposes a parliamentary system for anarchic Somalia, with both Puntland and Galmudug recognized as states within a federal system.

A new 225-member lower house -- including at least 30 percent women -- will be nominated by "traditional elders assisted by prominent civil society members," the agreement reads, released late Saturday after a three-day meeting.

The agreement is the latest among more than a dozen attempts to resolve Somalia's more than two decade-old civil war, with the country split between rival factions and pirate gangs who hijack ships far across the Indian Ocean.

Al-Qaida allied Shebab fighters, who control large parts of central and southern Somalia where they are battling African Union-backed government forces as well as Kenyan and Ethiopian troops, immediately condemned the deal.

"The agreement is treason because it is part of a master plan of the international community to send Somalia back to colonization," Shebab spokesman Sheikh Ali Mohamoud Rage told reporters.

"The mujahedeen fighters will not accept such conferences and their outcomes -- instead we fight against them and, with the help of Allah, we will win the war," he said.

Somalia has been without an effective central government since 1991, and the leadership in the capital Mogadishu is propped up by a 10,000-strong AU force from Uganda, Burundi and Djibouti.

In addition, a 1,000-member upper house -- the National Constituent Assembly -- will be nominated by agreement signatories "assisted by traditional leaders and civil society" groups. The upper house too must include at least 30 percent women.

"To ensure trust in the federal parliament, members must be patriotic, honest and of good standing in Somali society," the agreement reads, noting that anyone guilty of "serious crime or crimes against humanity" will be barred.

"They must respect and uphold the rights of all Somalis and demonstrate tolerance towards all," says the deal, signed in the northern town of Garowe.

Upper house members will be selected from a "cross-section of society" including representatives from the youth, businesses, diaspora, religious and traditional leaders and "existing and emerging regional administrations."

The deal also recommends "a compensation package" to appease existing lawmakers not selected for the new parliament, many of whom command militia forces.

The deal comes ahead of a London conference on Thursday aimed at mobilizing international players to tackle Somalia's multiple political and humanitarian crises.

Famine zones in Somalia declared by the U.N. last August were announced to have improved to emergency conditions earlier this month, but despite massive international aid efforts, conditions remain grim.

A third of Somalia's population need emergency aid and mortality rates remain among the highest in the world, the U.N. warns.