Russia Arrests Tajik with '800 Grams of Heroin in Stomach' 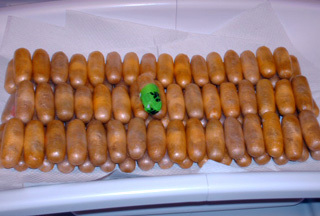 A Tajik national has been arrested in a Russian airport with 800 grams of heroin that he was transporting in his stomach, the customs service for Saint Petersburg region said Wednesday.

"A 20-year-old Tajik who arrived from Dushanbe was detained in Pulkovo airport. Doctors found 84 capsules containing 800 grams of heroin in his stomach," a spokesman for the northwestern customs office told Agence France Presse.

Saint Petersburg is Russia's second largest city that is close to Finland. The drug is worth approximately $60,000, according to experts.

Tajikistan, the poorest country in post-Soviet Central Asia, is one of the principal transit routes for drugs from Afghanistan, a neighboring country that is the number one exporter of opium to Russia and Europe.