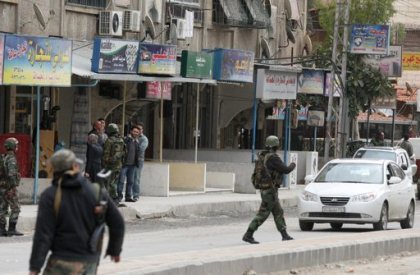 Syrian regime forces killed 55 civilians in clashes and shelling across the country Sunday, while at least 14 soldiers loyal to President Bashar Assad also died, activists and a rights group said.

Twenty-three people were killed in the central opposition bastion of Homs, nine in the central province of Hama, seven in the southern province of Daraa, 11 in the northwestern province of Idlib, three in the Damascus neighborhood of Kfarsouseh and two in the restive suburbs around Damascus, the Local Coordination Committees, the main activist group spurring protests on the ground, said.

For its part, the Syrian Observatory for Human Rights said nine civilians and four soldiers were killed in clashes between loyalist troops and rebels in the center of the city of Homs.

The deadly exchanges erupted in the Hamideyeh neighborhood as Syrians were called on to vote on a new constitution, the Britain-based watchdog said.

Shelling of a number of rebel areas of Homs killed another three civilians, it added.

In the northern province of Aleppo, regime snipers killed a civilian in the town of Ezaz, the Observatory said.

Explosions were also reported in the northeastern oil city of Deir Ezzor, the central city of Hama and the northwestern province of Idlib, where a civilian was shot dead in the town of Maarat al-Numan.

In Daraa province, the cradle of the protests that erupted against Assad's regime in March last year, regime forces killed a civilian in Alma and rebel troops clashed with soldiers in Hirak.

Three members of the security services were killed in the city of Daraa as their vehicle was targeted by rebel troops, while two soldiers were shot dead in the village of Dael as they mounted a minaret, the Observatory said.

One member of the security services was shot dead and four others wounded when their vehicle was attacked in the city of Nawa, triggering heavy gunfire from security forces that killed one civilian.

On Saturday, 98 people were killed, 72 of them civilians, the Observatory said.

Thank you, Russia and China.

The Russians are not any better than the Syrians. All this is about to them is a good arms customer and a base at Tartous. This is how low Putin really is. Yes, Putin cause he is really in charge.

OK, so in conclusion, Syrian Army clashed in many spots with ARMED rebels and killed many opposition civilians. I see. The world media must think we are stupid or something.

Well, what do you expect from a dictator when you shoot at his troops. So you get what you deserve. You don't like the syrian regime, you are more than welcome to go to other countries. Lebanon was always full of syrians.

how about if they dont like the dictator they rebel, persevere, prevail and then send the dictator to lebanon or russia or abr bayo lol?

it is extremely important for bashar to win totally the homs battle... to protect tartous which is home to the russian naval base. LOSING HOMS IS STRATEGIC TO THE AXE OF THE REGIME/RUSSIA/IRAN.

These numbers are dwindling down as the Syrian government asserts its control over the regions occupied by the Al Qaida killers who were sneaked through from Lebanon. For once I agree with Gabby, thepatriot, allouchi, peace, slash and the rest of the croud that the game is close to being over. khayra bi ghayra