Horse Semen on the Menu at N.Z. Food Festival 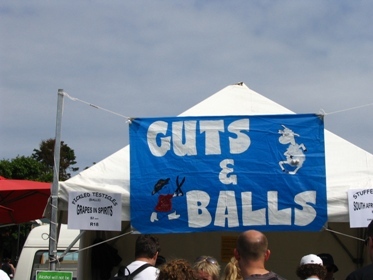 Long renowned for pioneering extreme sports such as bungee-jumping and heli-skiing, New Zealanders are now pushing culinary boundaries by serving up shots of horse semen to iron-stomached food lovers.

The equine delicacy will be on the menu at the annual Wildfoods Festival in the South Island town of Hokitika next month, along with other gastronomic delights such as raw scorpions, chocolate-covered beetles and deep-fried grubs.

He said the shots being sold at this year's festival on March 12 would taste like a milkshake and be washed down with an energy drink chaser.

Organizer Mike Keenan said he expected many festival patrons would sample the shots as a dare, and he was prepared to put his own stomach on the line.

"Yeah, I'll give it a go," he told Agence France Presse.

Keenan said the festival began 22 years ago as a way of allowing city slickers to "get out of their comfort zone" and sample bush tucker.

While much of the fare such as venison and wild boar is relatively unchallenging for mainstream tastes, Keenan said organizers liked to spice up the menu with more unusual offerings.

In the past, these have included rams' testicles and bulls' penises, although Keenan admitted Kerslake may have set a new benchmark.

"He thought these flavored horse semen shots would be something different," Keenan said. "He's working on a number of flavors, from vanilla, right through to strawberry and chocolate.