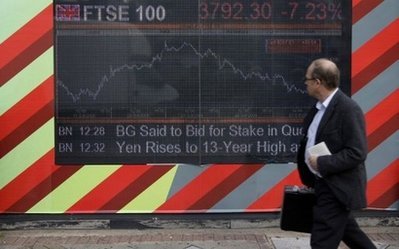 Europe's stock markets and the euro fell on Friday as investors reacted to fresh monetary tightening in China ahead of an eagerly-awaited Group of 20 finance meeting in Paris.

China's central bank announced Friday it would raise the amount of money banks must keep in reserve as it struggles to keep inflation under control in the world's second biggest economy.

The reserve requirement ratio will be raised by 50 basis points from February 24, the People's Bank of China (PBoC) said.

"China seems to be becoming increasingly concerned with its property market spiraling out of control as it applies the brake to bank lending yet again," ETX Capital trader Manoj Ladwa said.

The announcement from China, which has a voracious appetite for commodities, hit London's FTSE particularly hard because of its high gearing towards the mining and resources sector, according to Ladwa.

Meanwhile, in foreign exchange deals, the euro slid to $1.3554 as finance ministers gathered in Paris to hammer out common criteria for measuring global economic imbalances.

French President Nicolas Sarkozy has vowed to reform the world monetary system and commodities markets during his year at the G20 helm, saying he aims to defend poor economies from currency and trade turbulence.

"The G20 meeting ... is also expected to ratify the agreement earlier this week by (Eurozone ministers) to double the EFSF bailout fund to 500 billion euros, though Germany will no doubt want some onerous strings attached," noted CMC Markets analyst Michael Hewson.

"Overshadowing all of this has been increased tensions across the Middle East," he added.

Financial markets were on edge this week after violent protests from Bahrain to Libya, with tensions also heightened by Iran's reported efforts to send naval ships into the Mediterranean.

Demonstrators in various Arab states have drawn inspiration from pro-democracy protests that led to the recent oustings of leaders in both Tunisia and Egypt.