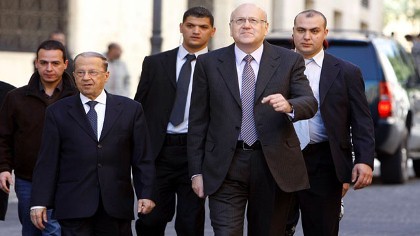 Finance Minister Mohammed Safadi was on Monday tasked with preparing a draft-law on the extra-budgetary spending made by the governments of ex-PMs Fouad Saniora and Saad Hariri in 2006-2010, drawing the ire of the March 14 opposition which is demanding a comprehensive solution that would also include the adoption of a $5.9 billion 2011 spending bill.

After a meeting held at the parliament by Speaker Nabih Berri, PM Najib Miqati, and MPs Michel Aoun, Suleiman Franjieh, Mohammed Raad and Talal Arslan, Safadi was asked to prepare the draft-law for approval by the cabinet, which will later refer it to parliament.

But the March 14 forces, which on Monday boycotted a parliamentary session that was set to discuss among other things the $5.9 billion bill of Miqati’s government, reiterated that they would reject any solution that does not legalize all the spending made since 2006.

The major point of contention between the March 8 and 14 alliances is the $11 billion spent by the Saniora and Hariri governments between 2006 and 2009, which the Change and Reform bloc of Aoun claims was riddled with corruption.

But in a new development, As Safir daily on Tuesday quoted Safadi as saying that financial violations were committed in those years and the spending was in reality more than $16 billion.

This in addition to a $5 billion extra-budgetary spending made by the national unity cabinet of Hariri in 2010.

The finance minister told the newspaper that he would refer the draft-law to the general-secretariat of the government on Tuesday.

This would lead to a full and not a partial settlement of the spending between 2006 and 2010, he said, stressing “we don’t want to complicate the issue. On the contrary, we are seeking to find a way out” of the crisis.

But several March 14 lawmakers, criticized the process with al-Mustaqbal bloc MP Ghazi Youssef telling An Nahar newspaper that the opposition will continue to boycott the parliament until it agrees on a single proposal that would legalize all the spending.

Youssef told Voice of Lebanon (100.5) that the opposition doesn’t mind for the cabinet to propose a draft law on the spending on condition that it is linked to the $5.9 billion bill.

Youssef and al-Jarrah have proposed a draft-law to counter the $5.9 billion bill but Berri did not put it on the agenda of Monday’s session, which later collapsed due to lack of quorum.

better to change and reform the future not the past....

So now it’s 16 Billion! Thank you Mr. Safady for walking a further step on the path of truth. Poor Siniora he’s digging his own grave and he’s taking Geagea, Gemayel ,Harb, Soueid and co. with him. Oh well:”if you can’t do the time don’t do the crime”

if this government spent 5.9 billion in one year, then 16 billion over 4 year equal to 4 billion per year. doesn't that make the bigger thief M8?? i agree anyone who just blurts things out is 1-blind and stupid. from the calculations the Siniora government is saving the Lebanese state nearly 2 billion per year. going at this rate in 4 year M* will have an extra spending of 24 billion. things that make you go hmmm... some people love playing on words.

No i think both are extra spending over the twelfths system. I 7amdilla read other news sites but i think they are trying to link both EXTRA SPENDING amounts to the same bill, i.e. legalizing both since they are both over the budget.

min ayna laka haza ?
this should be applied to all lebaneses from the top of the pyramid and downwards , if anyperson gives proof of his wealth sahtein 3ala 2albo
if not take the money and hang them directly

If I were one of the thieves and crooks, I, too, would go berserk not just get angry.

These two together can make a strong fair government where everybody under the Law...Oouft!! finally we can vision ahead for a new clean country. Love you both!! :)

Thank you Sophia ur a breath of fresh air :)

how come the finance minister now discovers these additional amounts? no one above is asking this question!
is it that hizbushaitan is putting pressure?
anyway: who was bassil before he came into the picture of politics and where did he gather the millions? you do not ask yourself that? what about all the rest like kanaan and auon himself (he is living on his retirement salary?)
come on guys, this a farce.....

If Assad remained so what then!? your Saad & Hakim will crawl to Aoun for mercy?! what a good vision 30 years and still same short minded fellows...Read lebanese history then predict, the extreme that could happen here is civil war or to all sit together & find a way to live together bass akid all guilty in stealing & murderes should be brought to justice.

Man don't you want to know where the billions went? it's ur right just as much as it's any M8's right, after all you didn't see a dime of what they stole

kesrweneh, yes dude I truly do but the law should not be selectively applied. You see M8 assumes and accuses without any proof but out of revenge. Let's put everything on the table for all parties and politicians. Really enough is enough, we are all suffering.

no who cares we wont get it back

Lebanese politics is disgusting...I'm going to go throw up now

Everything is confusing here, the 16 billion were made extra or within the budget every year? do not forget as well the 2006 war, the airport reconcstructions, the 2007 Nahr el Bared war ( or maybe the ammunitions were free... ) , the 2008 month war, the 2009 preparations for elections. As well as the tents and closures of businesses ( Who went bankrupt because of thugs taking downtown for granted). But the most important part was that most of the ministeries who received the EXTRA money were :

Those must be questionned mostly. I agree we should audit March 14th governeemnts but M8 as well that was part of it .

What i stated above does not give an excuse for March 14th to escape its obligations as well as March 8th. It is just my own view on how maybe an approximative 8-9 billion extra were spent, but if its really 16, then yesterday's politicians ,which are those of today as well, should all be judged.

But i want to ask March 8th christians something, about the history book, they denied we had any resistance, or even the resistance of your dear genera against the syrians. And they called the 2005 cedar revolution which Tayyar also took part of, an american project. Where are General's comment on that? or even yours? do you agree with that?? and the worst part is that its Gaby layyoun, an FPM minister that proposed this history book. Just for that, not recognising nor the armenian entities or maronite struggle during civil war, as well as general Aoun's courageous war against the syrians, and even his participation with the lebanese front under code name " RAAD" ( please read : les secrets de la guerre du Liban) confirms to me he has forgotten all his principles.

It's amazing how everybody is reading half of the story. Can you please step back read it again without the pre-judgement and than talk. Man it was and still is and will be always the biggest problem in the Lebanese society no one listen or read. Everyone wants to express his own ideas without hearing the others opinion. Well guess what nothing gonna change unless you think for yourselves and not any body else, make your own decisions study the case yourselves and see what you think don't be followers all the time.

Oh like how hezbollah is boycotting the STL?? Forget the past, its over and gone. we have a shitty history and this country needs the old politicians gone and a new breed needs to come out ....but you blind people will never accept that.

I'm running for office will you vote for me?? I have no history in politics but will serve the interests of the whole Lebanese population.