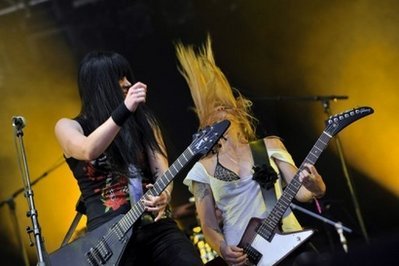 Uzbekistan's state television Monday issued an unequivocal denunciation of rock and rap as a Western liberal excess, saying the music is epitomized by sadism, drug addiction and immorality.

Uzbekistan is Central Asia's most populous country, where 90 percent of the 28 million inhabitants are Muslim.

The secular government, wary of both religious extremist ideology and "excesses of Western democracy", has in recent months shown increasing impatience with cultural imports from abroad.

The documentary, made in the style of a Soviet propaganda film, said "rock music originated from African hunting rituals" and "rap was originated by inmates in prisons, that's why rap singers wear wide and long trousers".

"This satanic music was created by evil forces to bring youth in Western countries to total moral degradation," according to the documentary.

Some of the Uzbek singers interviewed lambasted Western style pop and heavy music and said that the salvation from their hazardous effects was to be found in Uzbek classical music.

"If you check disks or flashcards in your home you may find some of the rock or rap songs performed by Uzbek singers as well... and be aware of the satanic effects of this evil music," the narrator warned.

The documentary also mentioned scientific research studying the effects of the music on human health, saying that if classical music was a cure from illnesses, rock and rap are the tickets to death.

The film repeatedly showed footage of Western singers in concerts, an encroaching scorpion and ended with nuclear bomb blast in the background and asked if "we can take measures against the dark clouds".

The broadcast of the documentary comes after Uzbekistan withdrew approval for the broadcast of two Russian television channels, reportedly due to the high sexual content in some of their shows.