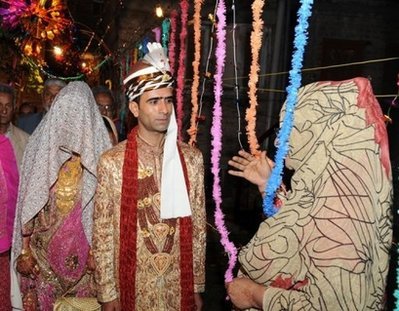 The Indian government is considering proposals to limit the number of guests allowed at weddings to reduce food wastage, an official told Agence France Presse on Tuesday.

Indian weddings are famous for their extravagance and a wave of new money in the country has led to ever more lavish marriage celebrations, often involving multi-cuisine buffets and hundreds, or even thousands, of guests.

"We are looking into the possibility of reintroducing the executive guest control order created in the early 1960s," an official at the ministry of food and consumer affairs in New Delhi said.

The rules limited the number of guests at weddings and other functions to deal with the scarcity of food, he said.

"Today the issue is not scarcity, but food is still being wasted and maximum amount of food is wasted at weddings," the official, who declined to be named, added.

Such a potentially unpopular move attracted sharp criticism from the opposition, which slammed the government for failing to address serious issues such as food price inflation.

"This is an absurd and obnoxious proposal," Prakash Javdekar, spokesman for the main opposition Bharatiya Janata Party (BJP), told the Mail Today newspaper, which ran the story on its front page.

Food minister K.V. Thomas calculated nearly 15 percent of all grain and vegetables in India was wasted through weddings and other social events, the paper said.

"We believe we can preserve food grains for the poor and needy of this country by restricting its use at such extravagant and luxurious social functions," Thomas was quoted as saying.