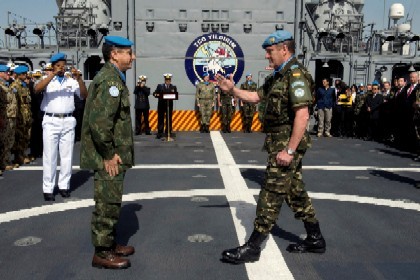 Rear Admiral Luiz Henrique Caroli of Brazil assumed command of the Maritime Task Force (MTF), the naval component of the United Nations Interim Force in Lebanon (UNIFIL), in a ceremony Thursday aboard a ship at Beirut Harbor.

UNIFIL Force Commander Major General Alberto Asarta Cuevas handed over the MTF command to Rear Admiral Caroli aboard the Frigate Yildirim (Turkey) in the presence of representatives of the Lebanese army, as well as diplomats and officers from UNIFIL Troop Contributing Countries.

Asarta thanked Brazil for its contribution and praised the work of the MTF and the Lebanese Navy.

“The MTF is playing a critical preventive role, warding off attempts at illegal arms trafficking and incidents on the line of buoy,” he said. “The Lebanese Navy, despite constraints, has demonstrated, time and again, its professionalism and outstanding commitment towards securing Lebanese waters, in close partnership with the MTF.”

The force commander reiterated that sustainable peace is achievable in southern Lebanon. “The continued efforts of the MTF will be vital to seize the momentum and build on the achievements made thus far,” he added.

“The Brazilian Navy is very proud to join the MTF and we hope we can help on the successful work that has been done,” Caroli said. “The growing capacities of the Lebanese Navy allow us to see a promising future,” he added.

Since the start of its operations on October 15, 2006, MTF has hailed around 36,000 ships and referred nearly 900 suspicious vessels to the Lebanese authorities for further inspections.

A native of Rio de Janeiro, Caroli attended the Brazilian Naval College in 1973 and rose in the ranks to the admiralty in 2007. He was assigned to a number of naval posts, served as Commanding Officer of the Aircraft Carrier “Sao Paulo”, Riverine Patrol Ship “Pedro Teixeira”, minesweeper “Atalaia” and the Brazilian Navy Fleet Training Center “Almirante Marques de Leao”. He was awarded a number of Brazilian military medals.

Caroli earned a doctorate in Naval Sciences from the Brazilian Naval College and attended courses on naval warfare, strategy, policy, planning and management. He studied English at the University of Cambridge, England.