Calm returns to European markets ahead of weekend 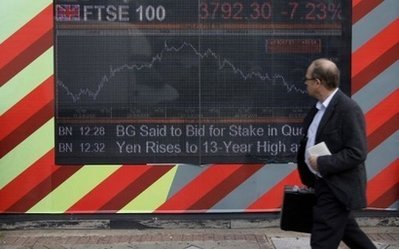 European stock rose on Friday as some calm returned to global financial markets after a rocky week driven by Middle East fears while London resumed trading after a technical glitch closed the bourse for the morning.

London's FTSE 100 index of top shares rose 0.86 percent to 5,971.18 points, having reopened at 12H15 GMT following an outage which halted trading for more than four hours.

Markets suffered heavy losses earlier this week as investors flocked to the safe-haven Swiss franc and yen amid violent unrest in Libya that sent oil prices rocketing close to $120 per barrel.

"After taking a battering this week, risky assets are getting a little respite today. Stocks are higher, the (Swiss franc) and yen are off their highs and the dollar ... is finding support."

In foreign exchange trade, the European single currency edged up to $1.3808 from $1.3797 late Thursday as traders also bet on rising interest rates to combat building inflationary pressures in the Eurozone.

London's technical glitch, meanwhile, followed similar outages in both Milan and Paris earlier this week, and comes amid a fast-moving flow of company earnings and economic data against a backdrop of nerves over the unrest in Libya.

"At a time of uncertainty in the markets, where traders are having to keep on their toes with the situation in Libya, the last thing they need is an unexpected halt to trading," City Index analyst Joshua Raymond said.

Britain's economy shrank by a worse-than-expected 0.6 percent in the fourth quarter of 2010, official data showed on Friday, hit partly by the impact of harsh wintry weather.

"Gross domestic product (GDP) contracted by 0.6 percent in the fourth quarter of 2010, revised down from the previously estimated fall of 0.5 percent," the Office for National Statistics said in statement.

That marked the largest quarterly drop in GDP -- the total value of goods and services produced in the economy -- since the second quarter of 2009.

The sharp contraction followed expansion of 0.7 percent in the third quarter of last year. Market expectations had been for no change to the initial estimate.

International Airlines Group, formed last month via the merger of British Airways and Iberia, posted modest 2010 net profits, shrugging off the impact of strikes and severe weather conditions late in the year.

The results were calculated on a pro-forma basis as if British Airways and Iberia had already been trading as a combined group.