Miqati from Tripoil: We all Want the Truth and Justice, Weapons Must be Directed towards Enemy, Not Domestic Scene 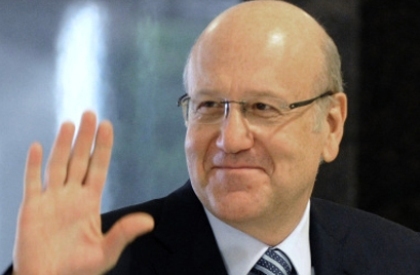 Prime Minister-designate Najib Miqati stressed on Friday that he is seeking to form a government that would rise up to the expectations of all the Lebanese.

He said during a popular gathering in the northern city of Tripoli: "We ask for forgiveness over the delay in the Cabinet formation because we want to establish a government that works for the whole of Lebanon."

"We have assumed this difficult responsibility to extinguish the flame of strife and work for stability," he continued during his first trip to his hometown since his appointment as premier-designate.

"We return to you to derive our strength and determination from Tripoli to begin a major mission to restore its role in the country so that it may once again become Lebanon's second capital as it always has been," he added before the popular reception that was also attended by Caretaker Economy Minister Mohammed Safadi and MP Ahmed Karami.

"Tripoli has created national leaders. It is the city of moderation and we are all in its service," he stated.

Miqati asked: "Who of us is greater than Lebanon? Who of us does not want justice?"

"Let us return to dialogue under the authority of the state institutions and we are committed to the constitution that was produced by the Taif Accord," he said.

"All problems have solutions and dialogue solves them all," the premier-designate noted.

"We are keen on Lebanon's unity. We are a nation and whoever wants to transform us into a sect is harming our identity and convictions," he stressed.

An Nahar daily reported on Friday that Miqati will stay in Tripoli until Sunday and would welcome visiting delegations at his residence over the weekend.

Although no official statement was made on his activities on Thursday, An Nahar said Miqati met with Caretaker Minister Wael Abu Faour delegated by Progressive Socialist Party leader Walid Jumblat.

While no progress has been made in the formation of the cabinet, An Nahar said that the idea to grant the finance portfolio to Free Patriotic Movement leader MP Michel Aoun began floating again.

Aoun is at loggerheads with President Michel Suleiman over the interior ministry which was part of the head of state's share in Saad Hariri's government.

An Nahar said Miqati came under pressure over the possibility of granting the finance rather than the interior ministry portfolio to Aoun. However, the premier-designate is seeking to keep the finance ministry with the Sunnis and give it to Safadi.

Miqati held a 45-minute meeting with Suleiman at Baabda palace on Friday after the president's return from Rome.

The two men discussed the latest developments in the cabinet formation process.