Head of Syndicate of Gas Station Owners: Gasoline Will Be Provided to All Stations Starting Saturday 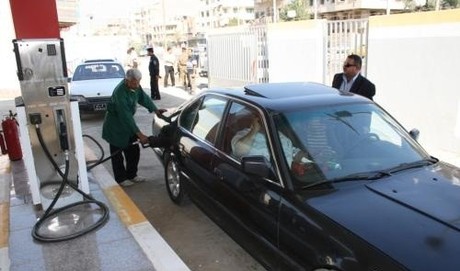 The head of the Syndicate of Gas Station Owners Sami Brax announced on Friday that gasoline will be provided to all stations starting on Saturday.

He made the announcement after holding talks with Caretaker Prime Minister Saad Hariri.

Brax credited Hariri, President Michel Suleiman, and Caretaker Finance Minister Rayya al-Hassan for their efforts in ending the crisis, as well as their efforts to lower the price of gasoline by LL5,000.

“We thank PM Hariri, President Suleiman, and Minister Hasan who helped the citizens out of a crisis that was heading into the unknown,” he continued.

Earlier on Friday, Suleiman had "instructed involved authorities to take the appropriate measures to decrease gasoline prices" by LL5,000 after a crisis gripped the country and most gas stations shut down.

A statement issued by Baabda palace said the president gave the instructions after reviewing the legal opinions of involved state institutions.

The finance ministry later said that it received an exceptional green light to lower gasoline prices by LL5,000.

The crisis erupted over the continued bickering between Caretaker Energy Minister Jebran Bassil and Minister Hassan over prices.

Around 70-80 percent of gas stations were shut on Friday due to a shortage in gasoline reserves following the halt of fuel supply by importing companies, according to Brax.

The companies have cut supplies because of continuing revenue losses as a result of Bassil's failure to issue updated prices on the cost of gasoline in tandem with the rising cost of oil in international markets.

The dispute between Bassil and al-Hassan began when Customs authorities refused to lower gasoline tariffs in accordance with a proposed LL3,000 tax cut by the energy minister.

Pro-Hassan officials argue that only the finance ministry has the authority to pass tax cuts.

The crisis led panicky drivers to flood gas stations on Thursday and early Friday in a reminder of long lines of vehicles during the 2006 war between Israel and Hizbullah.

Media reports said the shortage raised the black market price of gasoline in some areas to LL40-55,000 per 20 liters. The price before the Friday decision stood at LL36,300 per 20 liters.

Earlier in the day, Bassil accused Customs authorities of failing to meet his tax cut request and made a 24-hour ultimatum to "take the appropriate decision" to find a solution to the crisis.

He said he will file a complaint against the Customs Higher Council.

Prime Minister-designate Najib Miqati's sources also told An Nahar daily that he hopes the problem would be solved quickly and urges officials for joint efforts to "defend the people's rights."