Hariri Thanks Erdogan for Turkish Efforts to Evacuate Lebanese from Libya 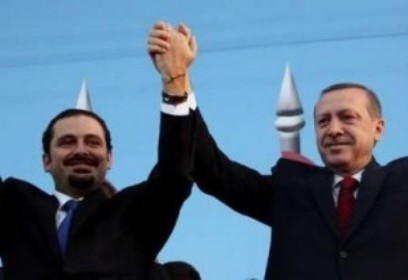 Hariri and Erdogan "discussed the ongoing efforts to evacuate Lebanese citizens from Libya," the premier's press office announced in a communiqué.

"Hariri thanked PM Erdogan for the efforts exerted by Turkey in this regard," the communiqué added.

Scores of Lebanese returned home from strife-torn Libya via Jordan on Sunday, urging Beirut authorities to facilitate the evacuation of other Lebanese citizens there, said Lebanon's state-run National News Agency.

The Lebanese came aboard a Jordanian plane along with several members of their family holding Libyan passports, said NNA.

On Friday, an official at Middle East Airlines, Lebanon's flag carrier, said Libyan authorities had refused to allow one of their planes to land.

The plane was intended to evacuate between 60 and 100 Lebanese nationals stranded at the airport in the Libyan capital.

Tens of thousands of foreigners have so far fled Libya by air, land and sea as world governments scrambled to pull their citizens out amid escalating violence.

"The situation of the Lebanese there is tragic," said Mustafa al-Hassan, 50, upon arriving at Rafik Hariri international airport.

He accused head of the Lebanese diplomatic mission in Libya, Nazih Ashour, of neglect. "We didn't feel he wanted to cooperate with us."

Another passenger, Iman Hadraj who is married to a Libyan, said: "There are a lot of Lebanese waiting to be transported to Tripoli's airport in order to come to Lebanon."