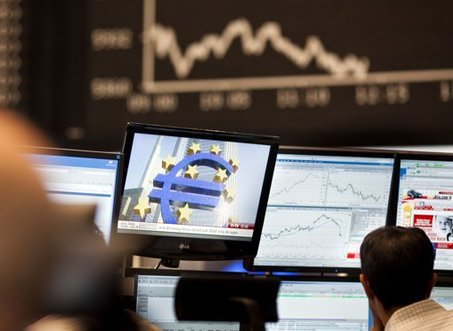 Europe's finance ministers crawled towards a compromise on a disputed financial transactions tax Saturday, after a German plan to break a months-long deadlock on the issue won cautious support.

Ministers effectively agreed to park a European Commission proposal for a wide-ranging EU-wide levy on the financial sector and consider Berlin's plan to tax trades on company stocks and shares.

In a letter to his colleagues, German Finance Minister Wolfgang Schaeuble acknowledged that his wish to see a wide-ranging tax introduced was unlikely in the face of British opposition and instead proposed "an intermediate step."

"This would entail a tax payable on all transactions involving shares of corporations listed on a stock exchange, with the tax levied according to the place where the corporation has its registered office," said Schaeuble.

Such a move would be based on a tax already in force in Britain -- stamp duty -- added the Berlin proposal, making it harder for London to block.

The suggestion won broad approval, with French Finance Minister Francois Baroin deeming it "wise" and stressing that "we have to move forward on this issue."

The finance minister of Sweden, which along with Britain, has been skeptical over a broad financial transaction tax, also showed a willingness to compromise.

"We have some differences of opinion," admitted Anders Borg as he briefed reporters after the meeting. "We will try to work constructively to find something that is common ground for the whole of the EU."

He stressed that the Commission's proposal, which seeks to tax not only trading in company shares but also complex financial instruments like derivatives, should be taken off the table.

"It's problematic for the recovery, for households and for corporates," said Borg.

Danish Finance Minister Margrethe Vestager, who hosted the meeting as Denmark holds the rotating EU presidency, said ministers would focus "primarily on alternatives, because that's where you find the most constructive atmosphere."

Speaking to reporters after the meeting, Schaeuble said that experts would come together to thrash out the remaining issues.

"We made good progress," he said.

"We agreed that, if we maybe don't reach the perfect solution of a broad financial transaction tax at a European level, because we need a unanimous decision for that, we should ... intensively look at a working group," he added.

"It is an important step in the right direction."

The tax aims to make the financial services industry pay its way in the future after banks especially benefited heavily from taxpayer bailouts when the mortgage meltdown in the United States sparked the 2008 global financial crisis.

The Commission's proposal from September has been strongly supported by nine countries, including European power couple France and Germany.

But Britain, home to 80 percent of Europe's finance industry, has warned that it would prompt investors to flee the 27-nation bloc.

Despite the opposition, Baroin stressed the "determination" of the nine countries backing the introduction of a broader tax, describing it as "an essential political project for us."

The German proposal insisted: "Negotiations on the Commission's proposal for a common system of financial transactions tax (FTT) should not be abandoned or postponed."

"I have not given up on the FTT," stressed Schaeuble.