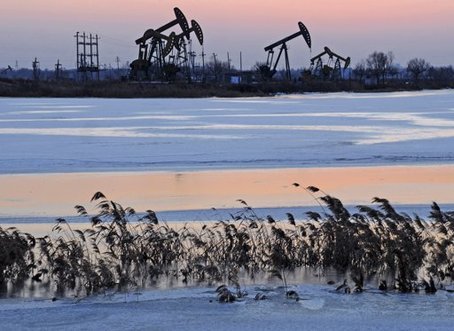 Benchmark oil for May delivery was up 22 cents to $103.24 a barrel at midday Singapore time in electronic trading on the New York Mercantile Exchange. The contract rose 24 cents to settle at $103.02 per barrel in New York on Friday.

China said Sunday that manufacturing gained momentum for a fourth straight month in March. The data contradicted a report by HSBC last month that suggest China's industrial production was slowing.

Increased consumption from developing countries has accounted for the majority of global crude demand growth in recent years. China is the world's second-largest oil consumer and the surge in its demand over the last decade or so has fueled a crude price jump from $10 in 1998.

"Almost the entirety of global oil demand growth will come from Brazil, India, China and Saudi Arabia," Barclays Capital said in a report. "Demand outside those countries has not been growing at all, and we expect that pattern to continue into 2012."

Investors are also watching tensions over Iran's nuclear program. President Barack Obama said Friday he plans to go ahead with economic sanctions against countries buying oil from Iran, while China rejected the decision, saying that Washington had no right to unilaterally punish other nations.