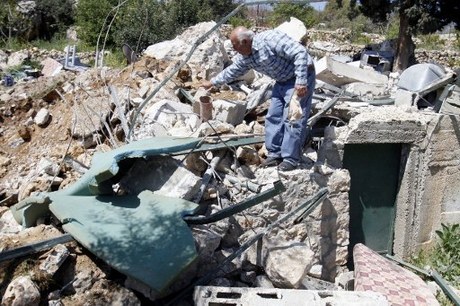 "At 4:00 am (0100 GMT) army tractors demolished four homes and 52 electricity pylons in the al-Makhrureh area of Beit Jalla," Mazen al-Azzeh, coordinator of the Popular Campaign to Fight Settlements in Bethlehem, told AFP.

"They want to confiscate the land for settler purposes, to connect the settlement of Kfar Etzion and Har Gilo," he said referring to two settlements which lie 10 kilometers (six miles) apart.

The demolition left residents in the area without electricity, the AFP correspondent said.

"This is a mostly a Christian area," Azzeh said.

"As the world celebrates Easter, this is the Israeli government's gift to the Palestinian Christian community," he charged.

A spokesman for the civil administration, the military unity which is responsible for all building issues in Area C, the section of the West Bank under Israeli military and civilian control, said he was unaware of the demolitions.

Israel regularly demolishes homes in area C, which covers some 60 percent of the West Bank, as well as in annexed Arab east Jerusalem on grounds that they have been built without the required permits.

The Palestinians say it is virtually impossible for them to get permission to build in such areas.

Rights groups and international organizations including the United Nations, have called on Israel to end such demolitions, saying they cause "extensive human suffering."

Maybe this should teach Lebanese to stop bickering and start working together because Israel does not differentiate between Christians and Muslims.

Maybe Hizbullah will start thinking about giving its arms to the Lebanese army and unifying Lebanon, instead of doing a big favor to Israel by keeping Lebanese divided.

Maybe a unified Lebanon can be in a better position to defend Lebanon from Israel and the Syrian regime.