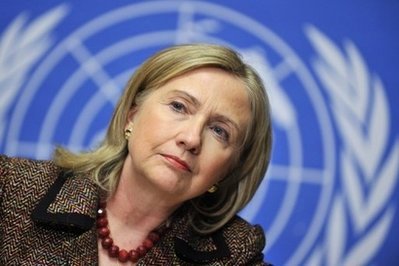 The United Nations on Tuesday suspended Libya from its main human rights body over Moammar Gadhafi's crackdown on protests as the Security Council warned of new action against his regime.

Britain's U.N. envoy said the council would take "whatever measures we consider necessary to respond to events on the ground."

The 192-member assembly passed a suspension resolution by consensus, without a vote, after U.N. chief Ban Ki-moon urged the body to "act decisively."

The Human Rights Council in Geneva had called for the suspension, which needed a two-thirds majority at the General Assembly to be passed. It is the first time it has acted against a member.

Nobody spoke up for the Libyan regime at the brief debate, though Venezuela accused the United States of planning an invasion, provoking U.S. fury. While U.S. ambassador Susan Rice called the Venezuelan envoy's comments "shameful."

Secretary of State Hillary Clinton said the United States "applauds" the move by the General Assembly to suspend Libya's membership and reiterated calls for Gadhafi's regime to immediately halt its attacks on the opposition.

The action came three days after the U.N. Security Council passed sanctions against the regime, including a travel ban and assets freeze against Gadhafi, his family and leading officials.

The council also approved an arms embargo and called for an investigation of potential crimes against humanity.