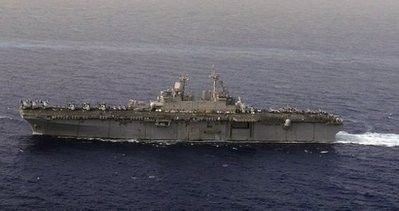 "The USS Kearsarge and the USS Ponce entered the Suez Canal from the southern entrance at 6:00 am (0400 GMT) and are making their way to the Mediterranean Sea," a canal authority official said.

On average it takes 12 to 14 hours for a ship to transit the canal.

The Kearsarge amphibious ready group, with about 800 marines, a fleet of helicopters and medical facilities, could support humanitarian efforts as well as military operations.

"We're certainly moving assets to be closer (to Libya)," a U.S. defense official said on Tuesday. "A ship like the Kearsarge is capable of many types of missions."