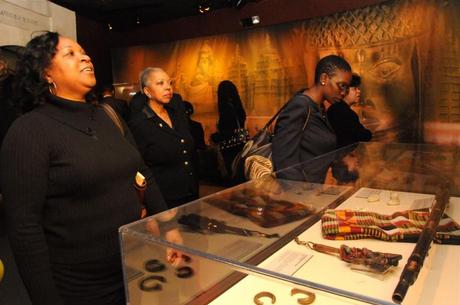 From shackles that bound African slaves when they arrived in America to a smiling image of President Barack Obama, the American I AM exhibit, currently in Washington, is a moving chronicle of African Americans' struggle and triumphs.

The exhibit has gathered more than 200 artifacts from personal or museum collections, along with photos and film clips, to chart how 500 years of hardship, faith and creativity have forged African American history and how black Americans have left a deep imprint on U.S. life.

Through 12 galleries covering 13,000 square feet (1,200 square meters) at the National Geographic Museum, the exhibit also recalls the inhumanity and brutality that blacks endured for centuries at the hands of white people.

The apartheid-like "Whites Only" signs that were widespread during the 1940s and '50s are relatively well known to Americans, but less talked about are items like the whip with a sterling silver handle to match a hairbrush and comb that a white plantation owner's wife kept by her bedside.

"I've never heard or seen anything like this before," Susan Norton, director of the National Geographic Museum, told reporters during a tour of the exhibit.

"Did she say, 'Well, let me think about the things I use every morning -- I need a whip'? Or did the silversmith decide she needed a whip to go with her brush and comb?"

School teacher Natasha Jones "invoked the spirits of our ancestors" as she walked past the original heavy wooden "doors of no return" through which Africans were marched in Ghana, in western Africa, before being loaded onto ships that carried them into lives of bondage in the new world.

"Each time I come here, I pay homage to the spirits of the ancients, and I can feel that they're here," she said as she bustled a class of eight-year-olds through the era of slavery, past civil rights trailblazer Rosa Parks' arrest warrant and a makeshift jail cell from which boomed the voice of civil rights leader Martin Luther King Jr.

In another gallery, New York census papers from the 1800s counted black men as three-fifths of a person. Black women didn't count at all.

Further on, Norton paused next to the distinctive hooded white robe worn by members of the Ku Klux Klan, a white racist and anti-Semitic group founded in the 1860s, and which exists to this day in the United States.

Next to the robe, Norton indicated a collection of children's Ku Klux Klan figurines.

"I can't imagine the mindset that would say, 'Oh, we adults are members of the Klan, so let's have little Klan toys that our children can play with,'" she told reporters.

The exhibit, which was the brainchild of African American talk show host and author Tavis Smiley, began a four-year tour of America in California in 2009. After Washington, it is due to move on to St Louis, Missouri.

In one of the last exhibit halls, 18-year-old Christian's gaze lingered on basketball player Michael Jordan's jersey before moving on to the autographed white robe that Muhammad Ali wore before the "rumble in the jungle" in Kinshasa.

The exhibit has no memorabilia of Obama, the first African American elected to the White House, but it does have photos of him, and a video clip of Obama taking the oath of office in Janaury 2009.

Next to a cotton gin in the "slavery era" gallery, Wilbert Carroll, 60, an African American teacher from North Carolina, remembered how, as a boy, he picked cotton for $3 for 100 pounds.

"A hundred pounds is a lot of cotton," he said, no rancor in his voice.

"Sometimes, you'd be out there all day and only go home with $2.50. But I had to do it to pay for my school uniform.

"Besides, we all did it, black and white. We worked side by side."