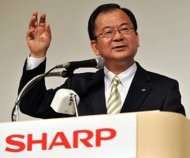 Japanese electronics giant Sharp is likely to report a net loss of nearly 400 billion yen ($4.9 billion) for the business year that ended in March, according to a report.

Slackness in its mainstay liquid crystal display (LCD) television business will drag the numbers below the earlier forecast loss of 290 billion yen, Jiji Press reported, without naming its sources.

The firm will announce its full year earnings report on April 27.

Last month, Sharp announced a deal with Taiwan's Hon Hai Precision as part of an LCD panel tie-up as it looks to reverse recent losses.

Under the deal, Sharp will sell 121 million new shares worth 66.9 billion yen to Hon Hai, giving the Taiwanese company a 10 percent stake and making them the largest shareholder.

Sharp said in February it expects to lose 290 billion yen for the year to March, reversing an earlier projection of a 6.0 billion yen net profit.

Japan's electronics giants have suffered in recent years due to rampant competition from foreign rivals sending prices tumbling, together with the effects of a strengthening yen and a stuttering global economy.