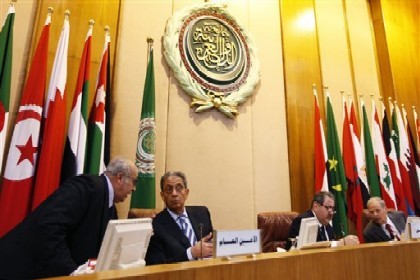 The Arab League said Wednesday it would consider backing a no-fly zone over Libya to end its crackdown on anti-regime rebels, but ruled out supporting any direct foreign military intervention.

"The Arab countries cannot remain with their arms folded when the blood of the brotherly Libyan people is being shed," the league said in a resolution after a meeting of foreign ministers in Cairo.

"The ministers have decided to pursue talks on the best way to protect Libya's citizens and to assure their security, including the imposition of an aerial exclusion zone and coordination between the Arab League and the African Union on this subject," it said.

The Arab League last month barred Libya from its meetings until strongman Moammar Gadhafi responds to the demands of protesters, amid a crackdown by the regime that one rights group says has killed 6,000 people.

League chief Amr Moussa had earlier told the meeting, attended by foreign ministers and representatives of the 22-member body, that the situation in Libya was "catastrophic".

But the decision to keep the no-fly zone option open was a surprise after officials at the Arab League had earlier appeared set against all foreign involvement in the situation in Libya.

The resolution passed Wednesday said the ministers "affirm the rejection of all forms of foreign intervention in Libya and the necessity to respect the Libyan people and their sovereignty."

Western powers are discussing the possibility of imposing a no-fly zone over Libya to support forces fighting Gadhafi's regime. Some opposition figures in Libya have begun calling for airstrikes.

But Secretary of State Hillary Clinton told senators Wednesday that the United States is a "long way" from deciding whether to impose a no-fly zone in Libya.

Clinton also told the Senate Foreign Relations Committee that U.S. officials worried in the longer term about "Libya descending into chaos and becoming a giant Somalia" where al-Qaida or its affiliates could gain a foothold.

The chief U.S. diplomat underlined remarks from U.S. defense leaders who said Tuesday that imposing a no-fly zone over Libya would be "extraordinarily" complex and that NATO has yet to agree on any military intervention there.

"There is a great deal of caution that is being exercised with respect to any actions that we might take other than in support of humanitarian missions," Clinton said when asked about military options for Libya.

The chief U.S. diplomat recalled how the former administration of president Bill Clinton, her husband, faced a similar situation in the Balkans in the 1990s.

Then "there were many, many reasons why it was not viewed with favor that we would set up a no-fly zone," she said. "Eventually it was determined it was in the interest of the peace and stability in the region."

But, referring to Libya, Clinton told the Senate Foreign Relations Committee: "I think we are a long way from making that decision."

If the United States and its allies imposed a no-fly zone, U.S. and other military aircraft would ensure that Gadhafi's warplanes and helicopters were grounded so they cannot attack the Libyan opposition.

Calls for a no-fly zone, similar to those imposed on Iraq and Bosnia in the 1990s, have come in response to media accounts that Ghadafi's forces have used aircraft to fire on civilians.

Admiral Mike Mullen, the U.S. military's top officer, said Tuesday that a no-fly zone "is an extraordinarily complex operation to set up."

He agreed with an assessment voiced by the head of U.S. Central Command, General James Mattis, who said enforcing a no-fly zone would require first bombing radar and missile defenses in Libya.

In reply to questions about what the Obama administration was doing to fight al-Qaida and its affiliates in Africa, Clinton said "one of our biggest concerns is Libya descending into a chaos and becoming a giant Somalia.

"It's right now not something we see in the offing, but many of the al-Qaida activists in Afghanistan and later in Iraq came from Libya and came from eastern Libya which is now the so-called free area of Libya," she said.

In Somalia, the al-Qaida-inspired Shebab group has long threatened to oust a weak Transitional Federal Government, which is backed by African Union forces.

Before the House Foreign Affairs Committee on Tuesday, Clinton alluded briefly to potential chaos when she said "in the years ahead, Libya could become a peaceful democracy, or it could face protracted civil war, or it could descend into chaos."