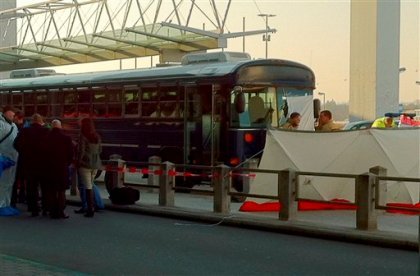 A lone gunman killed two U.S. airmen Wednesday and seriously injured two more in an attack on their bus at Frankfurt airport in Germany, local authorities and the U.S. military said.

"Two airmen have been killed and two were wounded during a shooting incident today at Frankfurt International Airport," the U.S. Air Forces in Europe (USAFE) said in a statement.

"The names of the deceased are being withheld until 24 hours after notification of next of kin. German authorities have the shooter in custody. The incident is currently under investigation."

U.S. President Barack Obama said he was "saddened" and "outraged" by the attack.

Authorities in Germany said the alleged killer was a 21-year-old originally from Kosovo in southeastern Europe living in Frankfurt. Police said it was so far unclear what his motives were.

The air force personnel had just flown in from Britain and were about to travel to Ramstein airbase near Frankfurt, German police said. It was unclear how many people were on the bus at the time of the incident.

The suspected gunman was seized by German police inside the Terminal Two building at the airport, one of Europe's busiest, Boris Rhein, interior minister of the western German state of Hesse, told reporters at the scene.

Police said he was armed with a handgun and reports said he also had a knife.

Police spokesman Andre Sturmeit told Agence France Presse that the injured had been taken to a civilian hospital, but he was unable to give any information on their conditions. He was also unable to say how many people were on the bus.

"The German government will do all it can to investigate what happened," Chancellor Angela Merkel told reporters in Berlin as she expressed her condolences to the friends and families of the deceased.

The scene was sealed off after the attack, an AFP reporter at the scene said, with the bus shielded from view by a screen. The German police and fire brigade were present, but no one from the U.S. military police was visible.

The U.S. military has a number of major bases near Frankfurt, including Ramstein, which are used as hubs for operations in Afghanistan and Iraq.

Germany, which opposed the 2003 U.S.-led invasion of Iraq but has more than 4,000 troops in Afghanistan, has beefed up security and surveillance in response to the threat of attacks in recent years.

The September 11, 2001, attacks on the United States were planned in part in the German port city of Hamburg by an al-Qaida cell led by Mohammed Atta, the hijacker of the first plane to strike New York's World Trade Center.

In March 2010 a German court jailed four Islamic militants who dreamed of "mounting a second September 11" for a thwarted plot to attack U.S. soldiers and civilians in Germany.

The men from the Sauerland cell, named after the region where three of them were captured in September 2007, admitted to belonging to a "terrorist organization", plotting murder and conspiring for an explosives attack.

The four included two German converts to Islam, a Turkish citizen and a German of Turkish origin.