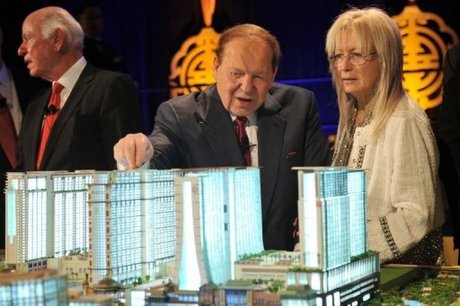 Las Vegas Sands Corp. opened its fourth casino in the booming Asian gaming capital of Macau on Wednesday, transforming a "swamp" earmarked for a fireworks factory into a $5 billion resort.

The Sands Cotai Central features three hotels, high-end retail stores, ballrooms, convention halls and of course casinos in what amounts to a double-down bet on the spending power of China's burgeoning middle class.

Located in the middle of the former Portuguese colony's casino strip, the Sands Cotai Central was 10 years in the making and was dogged by regulatory and financial obstacles including the 2008 global liquidity crisis.

The U.S. gaming company was reportedly close to bankruptcy three years ago as plummeting revenues in Las Vegas, combined with mounting debts associated with its Asian projects, played havoc with its balance sheet.

But the explosive growth of revenues from its Macau operations since the end of 2009 have helped the company turn the corner and Adelson predicted its share price would soon surpass its 2007 peak.

The southern Chinese territory overtook Las Vegas in terms of gaming revenue after the sector was opened to foreign competition in 2002.

Adelson rejected suggestions his company's dominance in the Macau market was unhealthy for competition, saying he was merely reaping the rewards of being among the first the enter the market.

"If you won the lottery for $100 million, how much of that would you share with people who didn't buy a ticket?" the U.S. billionaire said.

"The land was reserved for a fireworks factory... No one believed that this was a viable place for an integrated resort," he added, recalling his first visit to the "swamp" now known as the Cotai Strip.

Macau's gambling revenue soared 42 percent to a record $33.47 billion in 2011, but the pace of growth in the world's biggest gaming hub slowed from a year earlier, according to official figures.

The total is about five to six times higher than the amount that gamblers are thought to have spent on the Las Vegas Strip in 2011, according to Hong Kong-based brokerage CLSA.

The territory, which was handed back to China in 1999, is the only Chinese city where casino gambling is allowed.

Las Vegas Sands Corp. President Michael Leven said the gaming market in Macau had the potential to be "20 or 30 times bigger" than it is today, while the local hotel and convention businesses would also soon surpass Las Vegas.

The Sands Cotai Central project brings another 5,800 hotel rooms onto the market, boosting the city's total capacity by 26 percent, employs around 20,000 people and adds convention space for more than 50,000 people.

"We are witnessing the establishment of Asia's Las Vegas, not referring to the gaming aspect of it but to the multiplicity of activities," Adelson said.

The Sands chief said the group also had plans to build a "mini Las Vegas" in Spain worth $35 billion, as well as multi-billion-dollar integrated resorts in Japan, South Korea and Vietnam.