Cameron: U.N. Must 'Tighten the Noose' on Syria 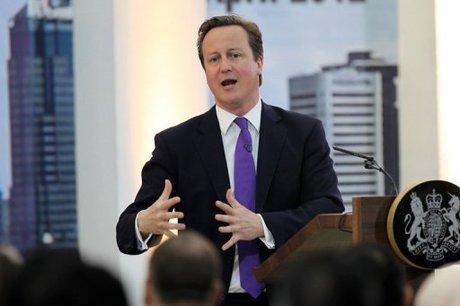 British Prime Minister David Cameron urged Russia and China on Thursday to join the international community and help "tighten the noose" on the Syrian regime over its deadly crackdown on protests.

A U.N.-backed ceasefire to end 13 months of bloodshed in Syria appeared to be holding after coming into force at daybreak, but doubts remained about the compliance of President Bashar Assad's government with the peace plan.

The regime broke a commitment to pull back its forces from population centers by Tuesday under a peace deal brokered by former U.N. chief Kofi Annan, and monitors said Thursday there were still no signs of a withdrawal.

"I feel an immense sense of frustration because the world has come together behind this Kofi Annan plan," Cameron told BBC radio from Southeast Asia, where he is on a trade mission.

"This is a plan, remember, that is not just backed by those of us who have been pushing for action on Syria, it's also backed by China and Russia. And yet Assad is deliberately flouting it.

"Now is the time to say to the Russians and Chinese, look at the man we are dealing with, look at the appalling way he is behaving. We need to go back to the U.N. and tighten the pressure, tighten the noose."

Foreign Secretary William Hague said Wednesday that Britain would seek tougher sanctions and would also intensify its support for the Syrian opposition if government forces did not adhere to the ceasefire.