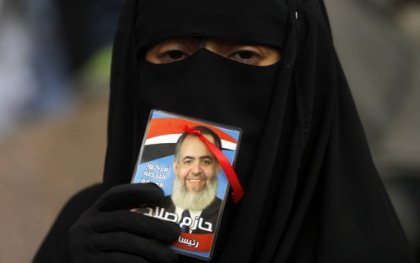 Salafist politician Hazem Abu Ismail looks set to rejoin the presidential race after a court ruled on Wednesday that his mother was not a U.S. citizen, the official MENA news agency reported.

Under the country's electoral law, all candidates for the presidency, their parents and their wives must have only Egyptian citizenship.

Egypt's first presidential election since a popular uprising toppled president Hosni Mubarak last year is scheduled for May 23 and 24.

The Cairo administrative court "has ordered the interior ministry to issue a certificate... to show that (Abu Ismail's) mother has never held another nationality other than her Egyptian nationality," MENA said.

"Here is the president," they shouted, as they set off fireworks in the crowded Dokki neighborhood in Cairo, where traffic had ground to a halt.

"Muslims in Egypt and particularly Salafists do not pose a threat to anyone," said Amr al-Naggar, a 26-year-old student of medicine.

The electoral commission will later this week examine the candidacy papers and issue a final list of approved candidates on April 26.

Abu Ismail advocates a strict interpretation of Islam similar to the one practiced in Saudi Arabia and has become a familiar sight in Cairo, with his posters adorning many cars and micro buses.

Islamists have made big strides since Mubarak's ouster, winning majorities in elections to both houses of parliament.

The Muslim Brotherhood’s Freedom and Justice Party won the most seats in parliamentary elections earlier this year, but the Salafists captured nearly a quarter themselves.