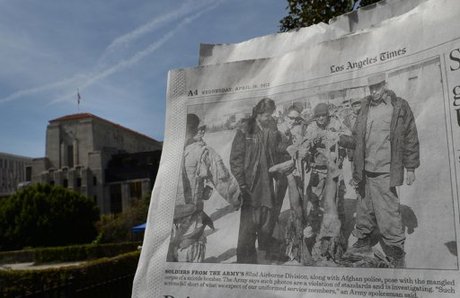 Afghanistan's Taliban on Thursday condemned photographs of U.S. soldiers posing with the remains of their militants, calling the two-year-old photos "inhuman" and vowing revenge.

The pictures, which date back to 2010 but were published by the LA Times on Wednesday, add to a string of recent scandals that have ignited anti-Western feeling and complicated NATO-U.S. efforts to build towards a 2014 withdrawal.

The Taliban "strongly condemns the brutal and inhuman act by the American invading force and their uncultured slaves," a statement from the militants said.

In some of the pictures Afghan police are also seen posing with mangled remains of the Taliban bombers with their U.S. allies.

"This is what the invading Americans teach to their Afghan slaves," the statement said, referring to the members of the Afghan security forces trained and funded by the U.S.-led troops.

The militant group, which has waged a brutal insurgency since being ousted from power in late 2001, said they would avenge the dead militants.

U.S. Defense Secretary Leon Panetta said those responsible would be punished but voiced "regret" that the LA Times had decided to publish the images against his wishes, warning that they could prompt a violent backlash.

The LA Times published two of 18 photographs it was given by a soldier who believed they pointed to a breakdown in leadership and discipline that compromised the safety of the troops.

One showed a soldier with a dead insurgent's hand draped on his right shoulder. The other showed soldiers grinning and giving a thumbs-up behind the disembodied legs of a Taliban fighter.

There are about 130,000 NATO troops, the bulk of them from the United States, in Afghanistan fighting the Taliban. Similar incidents have in the past led to violent protests by Afghans.