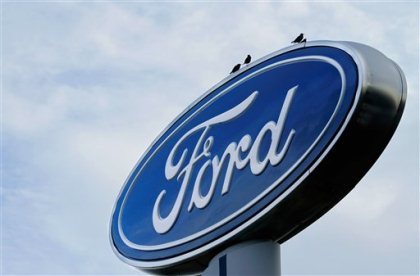 Ford Motor Co. plans to build a $760 million auto assembly plant in the eastern Chinese city of Hangzhou, part of a doubling of its production capacity in the world's biggest vehicle market as it strives to catch up with rivals.

The investment in the factory with joint-venture partner Changan Ford Mazda Automobile Limited will add annual capacity of 250,000 vehicles when it begins operations in early 2015, the company said Thursday.

Along with a recently announced new plant in Ford's main production base in Chongqing, in central China, Ford will double its current annual capacity to 1.2 million vehicles.

The new factory brings Ford's total investment in China to $4.9 billion. Growth in China's car sales has dived from torrid levels over the past year but automakers such as Ford expect to continuing benefiting from preferences for foreign brands.

They also expect the market to get much bigger in the years ahead. Even with 30 million cars on the road, China still has just 28 vehicles for every 1,000 people, far below the U.S. level of 800. Some 80 percent of purchases are by first-time buyers.

Unlike most foreign automakers that initially concentrated their investments in China's relatively affluent eastern coastal areas, Ford has built up its manufacturing in the less developed central-western region.

Now it is looking east, said Joe Hinrichs, Ford's president for the Asia-Pacific region, who is leading an Asian expansion that includes building seven plants and tripling the number of models available in China to 15 by mid-decade.

"This is the next big phase of our capacity expansion, tied to all the new products we have coming in 2014 and 2015," Hinrichs said in a phone interview.

"We wanted to balance out some of our geographic locations in China so we went looking for something along the eastern seaboard, where a lot of the volume is and also where a lot of suppliers are," he said.

Two weeks ago, Ford announced it would spend $600 million to expand its biggest factory complex, in Chongqing, to meet growing demand.

The company plans to launch four new global vehicles at the Beijing Auto Show next week. It has also said it plans to offer a version of the 2013 Escape, called the Kuga, in China at some point in the future.

"All this new manufacturing capacity is going in to support those new products," Hinrichs said.

Ford is trying to catch up with rivals who have been in China longer and command a bigger share of sales. It opened a new vehicle assembly plant in Chongqing in February, one of four new factories due to begin operations by the end of next year. The company already has two assembly plants and an engine plant in operation there.

Like many other automakers, it is banking on the potential for growth in sales in China's vast hinterland, where most families have yet to buy their first cars and demand is expected to soar with rising incomes.

The company chose Hangzhou — a base for Chinese independent automaker and Volvo Cars owner Geely Holding Group — partly because the city offered a good location and also because it could offer Ford a manufacturing license, Hinrichs said.

Due to the rapid growth of manufacturing capacity, the government is now limiting the issuance of production licenses.

"Now rules require that if a joint venture is expanding capacity outside its original location a license of another facility has to be canceled," he said.

Despite a sharp slowdown in sales after years of torrid growth, Hinrichs said that like other global automakers Ford is benefiting from a preference among Chinese car buyers for foreign brands.

"Any imbalance of demand and supply in the industry ultimately affects everybody," he said. But he added: "We watch the industry dynamics very carefully but we're very bullish on where consumers are and the interests of Ford."