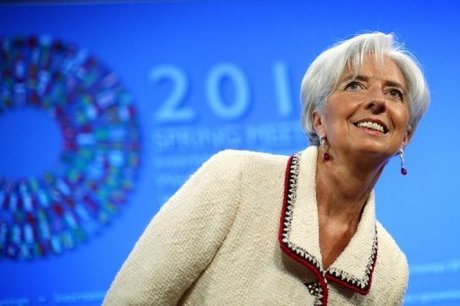 China and the BRICS emerging economies are set to flex their muscles as the top finance officials of the G20 and the IMF meet Friday seeking to raise $400 billion to prevent financial contagion.

Having already rolled back the goal for new crisis intervention funds from $500 billion, the International Monetary Fund remained some $80 billion short going into Friday's meetings in Washington.

Meanwhile the BRICS -- Brazil, Russia, India, China and South Africa -- stayed quiet on how much they would contribute.

With worries mounting that Spain might require the eurozone's fourth bailout, IMF head Christine Lagarde said Thursday she was confident the global crisis lender would get a significant boost to its intervention capacity.

"As part of the outcome of this meeting, we expect our firepower to be significantly increased," Lagarde told reporters on Thursday.

Lagarde did not give a figure for her "global firewall," but warned that "dark clouds" still hover and that more turmoil in Europe could affect the entire global economy.

Going into Friday's meetings, commitments had rolled in for $320 billion -- not enough, by recent IMF estimates, to construct a solid financial backstop against the kind of market turmoil that could spill out across the eurozone from any one foundering national economy.

But Finance Minister Jun Azumi of Japan -- which has pledged $60 billion to the crisis fund -- said he was optimistic the IMF would meet its goal.

"I think it is becoming highly possible that we will achieve a sum near the targeted $400 billion," Azumi told reporters in Washington, in footage broadcast in Japan on Friday.

"I think this will give relief and stability to the global economy."

Europe has pledged $200 billion and Nordic countries, Switzerland, Poland and others have offered another $60 billion.

The United States, the IMF's largest shareholder, has refused to contribute to the crisis fund, which leaves the BRICS the best source for cash -- and in a position to ask for more say in the way the IMF dispenses its funds.

After huge bailouts of Greece, Portugal and Ireland, developing countries have become increasing critical of the IMF's exposure to the eurozone.

China, the world's second largest economy, has remained mum on the issue, and many in the BRICS have voiced concern that their funds could be added to the three already huge bailouts under way in Europe.

"We are willing to discuss various funding plans for the IMF with IMF members, in a frank and positive manner," China's Foreign Ministry spokesman Liu Weimin said, according to Xinhua.

India's finance minister Pranab Mukherjee, speaking for his own country and the Group of 24 middle income countries -- including the BRICS -- declined to link contributions to the crisis fund with the size of their voice in the IMF.

But he did say that the G-24 felt the IMF needed to push harder to complete the minor restructuring of voting rights mapped out in 2010 and quickly embark on a much larger one.

"Quota reforms should not be delayed" he said, adding that the "ground realities" of the shift in economic power to the BRICS "ought to be recognized."

"We believe that the ultimate goal must be to better reflect the growing role of (emerging economies) as a whole in the global economy," the G24 said in a statement after meetings with Lagarde.

I like the name "BRICS", because a brick is a building block necessary to construct a new civilization.

But equally, a brick is a weapon, to toss through the window of any criminal Zionist banking institution!

Now we need another block of countries called “FIRE”!