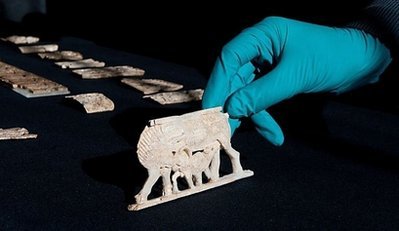 Precious ivory artifacts which crime author Agatha Christie cleaned using her face cream after her husband had excavated them have been bought by the British Museum, it was reported Tuesday.

The prolific author was present at excavations directed by her second husband, Max Mallowan, in the former Assyrian capital of Nimrud.

Preferring to undertake a less physical role, Christie said she used "an orange stick, possibly a very fine knitting needle... and a jar of cosmetic face cream... for gently coaxing the dirt out of the crevices without harming the friable ivory."

While at the site, Christie stayed in a room separate from the workers' tents where she penned several novels including "Hickory Dickory Dock."

The items, carved from African elephant tusks, include a lion's paw and a lifesize human ear.

The city was built in the 13th century BC by Assyrian king Shalmaneser I before becoming the capital of the Assyrian Empire five hundred years later.

The empire encompassed modern-day Iraq, Lebanon, Syria, Kuwait and Jordan, and around half of Saudi Arabia, Egypt and Iran.

Neil MacGregor, the museum's director said: "Not only are they beautiful but they clearly carry in them a whole set of stories."

Some of the 6,000 pieces will go on display at the museum from next week.