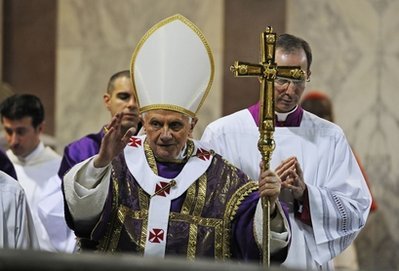 Pope Benedict XVI has rejected the idea of Jesus as a "revolutionary" saying he used the "power of love" in a new book in which he also says the Jews were not responsible for Christ's death.

The pope writes in the second volume of "Jesus of Nazareth", his biography of Christ, according to an Italian version of the book, that the son of God "did not come as a destroyer, he did not bring the sword of a revolutionary".

Christ instead came to the world "with the gift of healing", the pope says, adding: "His power is the power of love."

The book went on sale in bookshops on Thursday, and will be officially unveiled by the Vatican later in the day.

The Vatican said 1.2 million copies of the book had already been published in seven languages, including 200,000 copies in German, 150,000 in English and 100,000 in French and Spanish. E-book and audio book versions are planned.

In the biography, Benedict also says that Jesus separated religion and politics, which he states had previously been inseparable.

"This separation of politics and faith in the message he brings, was only possible through the cross," he said.

The 83-year old pontiff also speaks out against religious violence, following a wave of attacks on Christians in several parts of the Muslim world, including the New Year's Eve bomb outside a church in Egypt which killed 23.

"The terrible consequences of religiously-motivated violence are all too clear," he said.

The head of the Roman Catholic Church also touches on topical issues, such as the staying power of the world's despots. "Isn't it true that the biggest dictators are kept in power by ideological lies?" he said.

To the acclaim of Jewish groups worldwide, Benedict exonerates the Jewish people as a whole from responsibility for the crucifixion of Jesus Christ. He also calls for dialogue between the two faiths.

The pope writes that those responsible for Christ's crucifixion were the "aristocracy of the temple" in Jerusalem and the "masses" who acclaimed Barabbas instead of Jesus -- not "the Jewish people as a whole".

"After centuries of conflict, it is our duty," Benedict says, to ensure Christianity and Judaism "enter into dialogue, to righteously understand the will and word of God."

Tensions between Judaism and Catholicism have been high for centuries because of Catholic blame of the Jews for Christ's death, and a Vatican Council in the 1960s that exonerated them failed to end tensions.

Israeli Prime Minister Benjamin Netanyahu earlier hailed the pope's "courage," commending him for "forcefully rejecting... a false charge that has been a foundation for the hatred of the Jewish people for many centuries."

The World Jewish Congress also praised the pope, with director Ronald Lauder saying that it set "an important marker against anti-Semitism in the Church."

"Jesus of Nazareth", has been seen as Benedict's answer to popular publications such as Dan Brown's best-selling "The Da Vinci Code".

In his controversial 2010 book "Light of the World", based on 20 hours of interviews conducted by German journalist Peter Seewald, the pope broke a taboo with his declaration that condom use was acceptable "in certain cases".