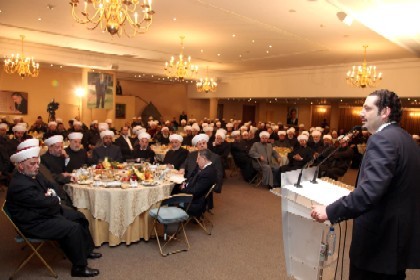 Caretaker Prime Minister Saad Hariri stressed on Thursday that arms that are directed against what is just will fail as was demonstrated in Tunisia, Egypt, and Libya.

“We want the establishment of a democratic state where citizens can express themselves freely,” he added.

He reiterated the March 14 camp demand for justice and the establishment of a state capable of protecting all its Christian and Muslim sons.

“We will practice our opposition in all peaceful democratic methods and we believe that the people’s affairs are more important than any political position,” he continued.

“Only the state can harbor all the citizens, and a single sect or a single political party cannot represent all the Lebanese,” Hariri noted.

Earlier on Thursday, the caretaker premier headed a meeting for the Mustaqbal parliamentary bloc at Qoreitem.