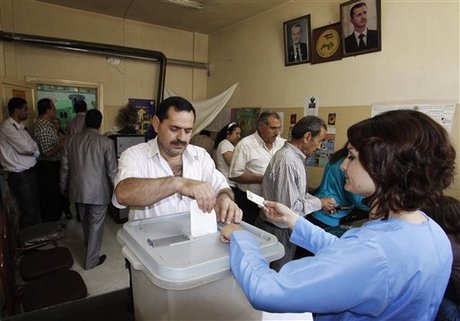 Syrians voted Monday in the first "multiparty" parliamentary election in five decades, against a backdrop of violence and dismissed as a sham by the opposition and bordering on the "ludicrous" by the U.S.

Voters cast their ballots in the capital and other regions, while in opposition strongholds residents boycotted the poll, instead staging protests and a general strike.

The election went ahead despite the unrest that has swept Syria since March 2011 when President Bashar Assad resorted to force in a bid to quash a revolt against his autocratic regime.

The United States said holding an election while violence is still raging "borders on ludicrous."

"It's not really possible to hold credible elections in a climate where basic human rights are being denied to the citizens and the government is continuing to carry out daily assaults... on its own citizens," the State Department said.

"Only a comprehensive and inclusive political dialogue can lead to a genuine democratic future in Syria," Ban said through his spokesman Martin Nesirky. "These elections are not taking place within that framework.

"Moreover, a democratic process cannot be successful while violence is still ongoing," he added.

The vote, initially scheduled for last September, was postponed to May 7 after Assad announced the launch of a reform process backed by a referendum.

A total of 7,195 candidates registered to stand for the 250 seats, state news agency SANA said.

The 12,000 polling stations closed at 10:00 pm (19H00 GMT), state television reported. There was no immediate indication of turnout or when the results may be expected.

Pro-regime parties led by Assad's Baath were represented under a coalition called the National Progressive Front.

The opposition dismissed the vote as a sham and a ploy by the regime to buy time and dupe the international community into believing it is serious about reforms.

"Whoever drowns Syria in blood, displaces... Syrians and shoots at the Syrian people does not have the legitimacy to draw up a constitution, an electoral law, or to run elections," the exiled opposition Syrian National Council said.

Several towns and villages across the country, including some neighborhoods of Damascus, held demonstrations, boycotted the vote and organized a general strike amid reports of continued violence.

Clashes between soldiers and rebels were reported in several areas of Hama province as well as other regions, the Britain-based Observatory said.

"There are no signs of a national election in or the surrounding areas," activist Nureddin al-Abdo told Agence France Presse via Skype.

"The regime is trying to delude itself that it still holds power by organizing these fake elections, but it is only capable of ruling with tanks."

Shops were closed and streets empty in several areas of Hama, Idlib, northern Aleppo, Daraa in the south and Damascus itself, activists said.

"In Aleppo, only the main polling stations were full, and that was because the authorities brought its loyalists in to vote," Aleppo-based activist Mohammad al-Halabi said.

"But the rest of the polling stations, where there was no media presence, were empty."

Another video showed an unidentified man in Midaq village of Hama province accusing paramilitary regime forces of having burnt down shops after their owners joined the strike.

Regime forces have killed six such journalists this year, according to RSF, which named the latest as Abdul Ghani Kaakeh, 19, killed in Aleppo while filming a demonstration.

According to the Observatory, more than 11,100 people have died in violence, most of them civilians, since the anti-regime uprising broke out in March last year.

Monday's election was the first time Syria has held a vote since the adoption in February of a new constitution allowing for multi-party polls. Nine parties have been created, and seven had candidates vying for a parliamentary seat.

Political analysts do not expect the election to lead to significant change in Syria, where a tenuous U.N.-backed ceasefire that came into effect on April 12 has failed to take hold.

More than 600 people have died since the truce began, according to the Observatory.

U.N. observers deployed in the country to monitor the truce have reported violations by both regime and rebel forces.

Foreign Minister Walid Muallem said on Monday that his government was "facilitating" the work of the observers.

And hence the "Best democracy in the region" Michelle Aoun lol...where people are "free"...free to eat, drink, dance, and graze but would be shot dead if they spoke politics. This is the kind of lebanon that president Aoun will deliver to the lebanese cattle.

A comedy in Hell !

Multi Party?????? Now he will tell the UN he had free elections with multiple parties.

A lot better than KSA and Bahrain...M14 and Zionist Hypocrites!!!

Who in their right mind would vote against the regime? By casting your vote (name) against the regime or anything supporting it, your signing a death warrant for Assad's thugs to come back for you at a later time.